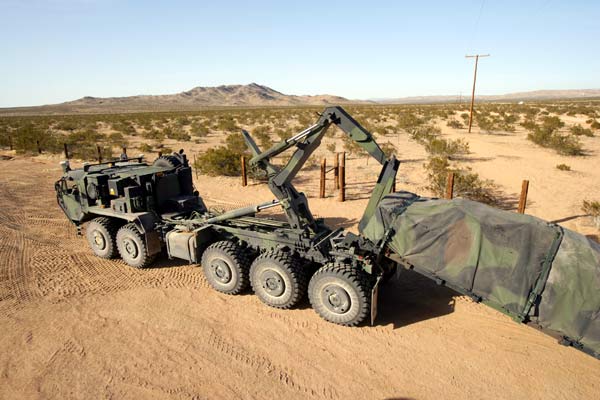 Oshkosh Defense has been awarded a bridge contract extension to continue development and support for the US Army's heavy tactical vehicles (FHTV) fleet in Afghanistan.

The contract modification follows the $11m bridge contract awarded to the company in December 2011 for the supply of 20 HEMTT light equipment transporters (LET), ten PLS A1 trucks and more than ten PLS A1 trailers.

Under the contract, the army will continue to place orders for FHTVs through to October 2013, followed by deliveries in September 2014. The FHTV fleet includes the heavy expanded mobility tactical truck (HEMTT), heavy equipment transporter (HET) and palletized load system (PLS), and is used by the army to carry out logistics operations in Iraq and Afghanistan.

The PLS supports highly mobile combat units in tactical environments by carrying ammunition and other critical supplies, including a wide range of cargo, and features an integral self-loading and unloading capability for a variety of flatrack or ISO compatible shelters and containers.

All three vehicles are equipped with air-conditioned and armour-ready cabs, electrical upgrades and anti-lock braking to keep soldiers safe and mission ready in harsh terrains.

Deliveries under the modification contract will be completed by December 2013.

Image: Oshkosh to continue development and support of US Army's Family of Heavy Tactical Vehicles (FHTV) fleet in Afghanistan.