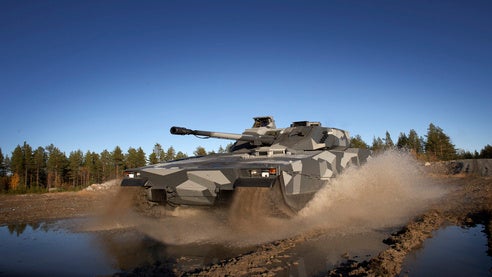 The Norwegian Ministry of Defence (MoD) has awarded a contract to BAE Systems Hagglunds for the upgrade and manufacture of CV90 infantry fighting vehicles (IFVs) for the country's army.

Under the terms of the £500m ($750m) contract, the company will manufacture a new vehicle chassis to supply a total of 144 CV90s in different configurations, while upgrading the army's current inventory of 103 CV9030 vehicles.

Norwegian Defence Logistics Organisation managing director Petter Jansen said that the army had built up considerable expertise about the vehicle, which will be further developed together with its Swedish supplier.

''This is one of the largest army investments and an important part of the Norwegian Army modernisation plan,'' Jansen added.

BAE Systems Hagglunds president Tommy Gustafsson-Rask added: ''We continue to invest in the CV90 system and develop the vehicle to keep it at the forefront of technology and in particular, to incorporate improvements in protection and digitization so that it remains the world's most advanced vehicle of its kind.''

The contract includes the supply of a total of 74 infantry fighting, 21 reconnaissance, 15 command, 16 engineering, 16 multi-role and two driver training vehicles, to perform a range of functions, including mortar carrier and logistics missions.

''This is one of the largest army investments and an important part of the Norwegian Army modernisation plan."

According to BAE, the new vehicle fleet will feature significantly enhanced protection, survivability, situational awareness, intelligence and interoperability, based on the experience drawn from the Norwegian Army's combat operations in Afghanistan.

Kongsberg Defence and Aerospace will play a key role in the project by delivering integrated data and information system, which also includes the installation of weapon systems, sensors, communication and security systems.

Kongsberg will also supply its Protector remote weapon station (RWS) that will be fitted on all variants of the vehicle.

The CV90 vehicles are expected to enhance the operational capabilities of Norway's armoured and telemark battalions.

Image: The CV90 vehicles will be designed to offer improved combat firepower and increased safety for its crews. Photo: courtesy of BAE Systems.