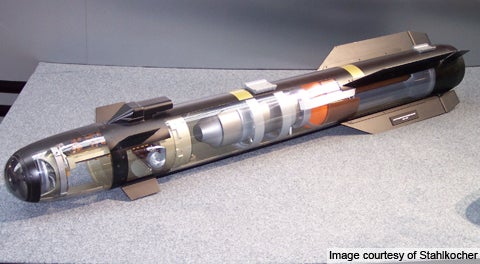 During the first two flight tests, the missile demonstrated its capabilities, including vertical launch, GPS navigation to locate targets at distances of up to eight and 12km, use of semi-active laser (SAL) seeker for precision strike accuracy and a live warhead detonation.

The missile also displayed the vertical launch of an inert round, followed by GPS-only navigation to a target located only 100m away during the third test-firing.

"Warfighters must be able to trust that the weapons they deploy will deliver the intended effects every time," he said. "Our three-for-three flight tests demonstrate the missile is reliable and lethal."

"Warfighters must be able to trust that the weapons they deploy will deliver the intended effects every time.”

Manufactured by Lockheed using proven technologies from Hellfire II, direct attack guided rocket (DAGR) and Scorpion missiles, the Nemesis is a surface-launched missile designed to help troops precisely engage targets from as close as 100m to well beyond line of sight during dismounted operations, with minimum collateral damage.

Fired vertically from its launch tube, the missile features a 360° engagement capability, and also enables users to select the height of burst or point-detonation fusing options to help enhance engagement with enemy personnel, light armoured vehicles and structures.

Readily configurable for internal or external carriage on other fixed and rotary-wing platforms, the missile addresses existing Special Operations Forces and US Marine Corps’ requirements for a standoff precision-guided weapon due to its ability to be deployed from airborne common launch tubes.