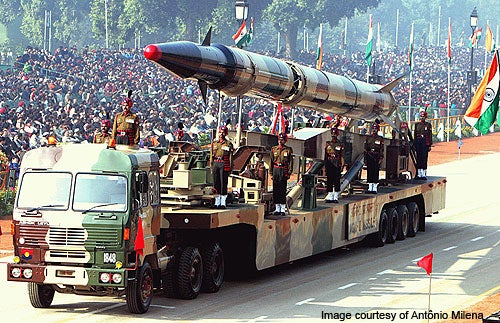 The Indian Army's Strategic Forces Command (SFC) has successfully carried out test-firing of its nuclear capable surface-to-surface missile, Agni-II, from Launch Complex-4 of the Integrated Test Range (ITR) at Wheelers Island off the Orissa coast, India.

During the ten-minute flight, conducted as part of routine user trials, the Defence Research and Development Organisation (DRDO)-built missile travelled its complete range prior to hitting a pre-designated point in the Bay of Bengal, with an accuracy of a few metres, reports The Hindu.

DRDO Public Interface director Ravi Kumar Gupta was quoted by The Times of India in a statement that the two-staged ballistic missile was launched from a mobile launcher, and addressed all mission objectives set for the trial.

"Radars and electro-optical tracking systems located all along have tracked and monitored all the parameters of the vehicle," Gupta said.

"Radars and electro-optical tracking systems located all along have tracked and monitored all the parameters of the vehicle."

Insisting that the test flight demonstrated army's efforts to effectively respond to any eventuality, an SFC spokesman said that the mission, 'fully validated our operational readiness as also the reliability of the systems and the missile'.

The missile successfully completed its first test-firing at the same location in August 2012, since its induction into operational service with the Indian Army's 335 Missile Group.

Manufactured as part of the DRDO's Integrated Guided Missile Development Programme (IGMDP), the Agni-II is a 20m-long, two-stage, solid-propelled medium range ballistic missile (MRBM) with an operational range of 2,000km.

Equipped with high-accuracy navigation system and guided by an innovative guidance scheme, the missile requires only 15 minutes to attain ready-to-fire mode and can carry 1,000kg nuclear warheads protected from intense heat when the missile re-enters the atmosphere using DRDO's re-entry technology.