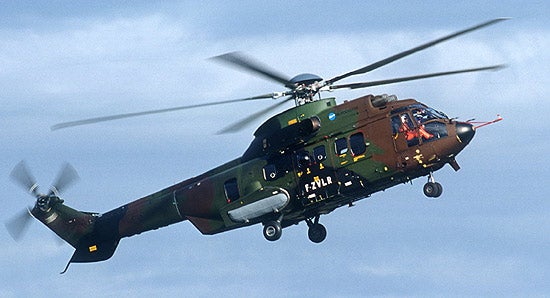 Brazilian Eurocopter subsidiary Helibras has been awarded a five-year contract by the Brazilian armed forces to provide and manage all spare parts, stocks and associated technical support for a fleet of 50 EC725 Cougar helicopters.

The €62m contract is the first agreement involving all three branches of Brazil’s military services and includes helicopter inspection, overhaul and repair as well as teams to provide on-site services including technical assistance at all bases across the country. The contract also covers the ongoing assembly of 50 aircraft at its new manufacturing facility in Itajuba, Brazil, and ensures continuous operation of all aircraft delivered during the period.

Helibras EC725 programme sales manager Mark Wagner said: "The armed forces will have huge savings with the purchase of parts and formation of strategic stocks, as it is not necessary that each service has its own structure of supply."

Eurocopter delivered the first three EC725s to the armed forces in December 2010 as part of the €1.9bn contract awarded under the H-XBR project to meet Brazil’s requirements for a mid-size multipurpose helicopter for tactical training and initial logistical support. As part of the project, the company will deliver a total of 50 such aircraft including 16 for the air force, 16 for the navy, 16 for the army and two for the government. Delivery of all 55 aircraft is scheduled for completion by 2016.

The Naval Vessels and Surface Combatants Market in Brazil to 2025: Market Brief

The Naval Vessels and Surface Combatants Market in Brazil to 2024: Market Brief

The Maritime and Border Security Market in Brazil to 2025: Market Brief

The Maritime and Border Security Market in Brazil to 2024: Market Brief