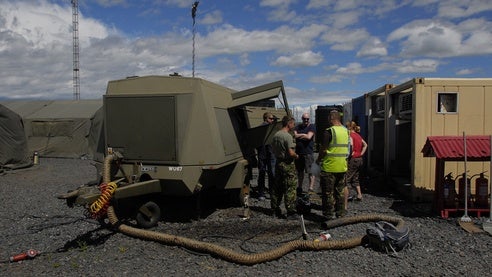 BAE Systems has successfully carried out its Power Operational Concept Demonstration (PowerOCD) for the UK Ministry of Defence (MoD) at the British Army Training Unit in Kenya.

Using the company’s deployed energy management system (DEMS), the trails confirmed that up to 30% fuel and maintenance cost savings can be achieved at army forward and main bases using the current defence and commercial generators respectively.

The trials were conducted as part of a £1.5m contract awarded to the company by the MoD’s Defence Equipment and Support (DE&S) technology delivery team.

"PowerOCD has given us hard data from a realistic, representative operational environment in Kenya," Jackson added.

"PowerOCD has given us hard data from a realistic, representative operational environment in Kenya."

BAE Systems energy solutions and services head Chris Courtaux added: ”Our energy management system successfully integrated within the existing bases and stood up well to the challenges of a real-use environment."

Operationally proven in the UK and Cyprus, the DEMS features an energy management system that controls generators, maintains storage and also intelligently manages demand to address operational requirements and energy use patterns.

The system functions by remaining connected between the distribution system and generator, which charges a battery system controlled by the DEMS console that switches off the generator when charging is complete.

The batteries will then provide power on demand, leading to improved efficiency and savings in fuel and maintenance.

Enabling easy management in the battlefield or remote operation from MoD sites at home, the DEMS is also suitable for all locations when power supply is not available from the main grid.