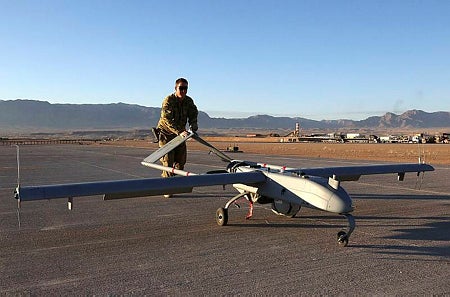 Remaining upgrade work includes software and some component modernisation, according to Galvin, who noted that the aircraft engine is the most regularly required replaceable item as it operates at higher altitudes and strenuous conditions in Afghanistan.

Around ten High-Mobility Multipurpose Wheeled Vehicles (HMMWV) are used by the US Army to control four aircraft and one launcher, but the Australian service will use nine Unimog vehicles to support its five aircraft system with two launchers.

The high tray of Unimog vehicle ensures the modular and palletised system’s air vehicles are unloaded with a hoist and sling system.

Other significant changes include replacement of the DVD mission recording and storage system with a new system capable of integrating voice overlays, enabling the distribution of recordings and information, and enhancing search capabilities.

"The service has completed 90% modification work on the UAS."

Manufactured by AAI, the RQ-7 Shadow 200 is the smallest of the Shadow UAS line, and is used for intelligence, surveillance, target acquisition and reconnaissance (ISTAR), as well as damage assessment in the battlefield.

Initially used by the US Army and Marine Corps in Iraq, the system is also capable of recognising targets on the ground and operates at an altitude of up to 8,000ft and at a range of 3.5km.

The army has taken delivery of two Shadow 200 TUAS out of the total 18 systems ordered as part of a $175m US foreign military sales (FMS) contract in August 2010.

The first system has been operational since August 2011, while the second was deployed in Afghanistan in the first half of 2012.

Image: An ADF soldier pushes a Shadow TUAS back to its hangar after a mission. Photo: courtesy of WO2 Andrew Hetherington/Commonwealth of Australia.