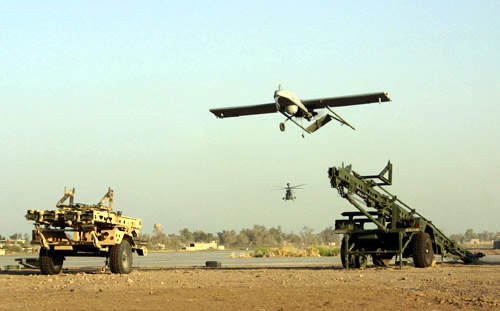 The Shadow Tactical Unmanned Aircraft System (TUAS) has seen operational service in Afghanistan and in Iraq. It has flown over 750,000 flight hours in more than 173,000 missions. 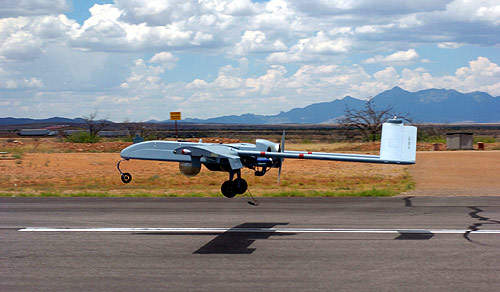 Shadow 200 is in service with the US Army and US Marine Corps and is used for target acquisition, battle damage assessment and battle management. 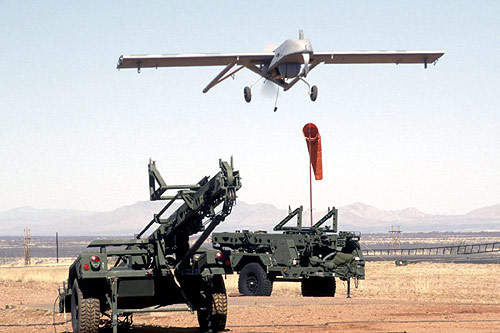 Shadow 200 can be launched from a hydraulic rail launcher (shown here) or by standard wheeled take-off, depending on launch site. 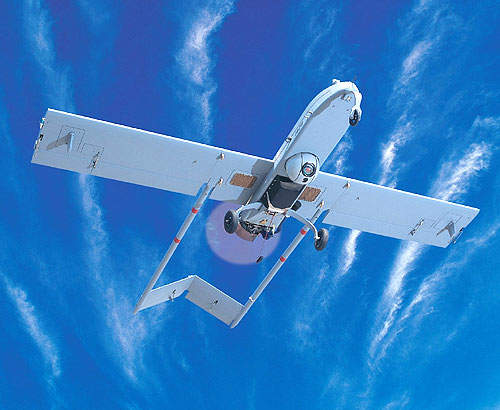 Shadow 200 can locate, recognise and identify targets up to 125km from a brigade tactical operations centre, transmitting imagery and telemetry data in near-real time. 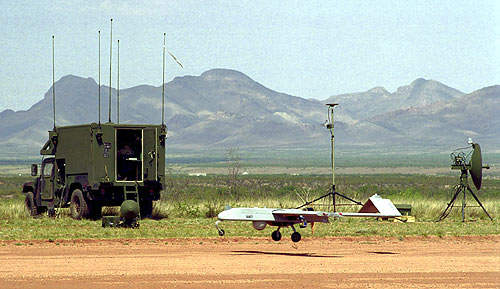 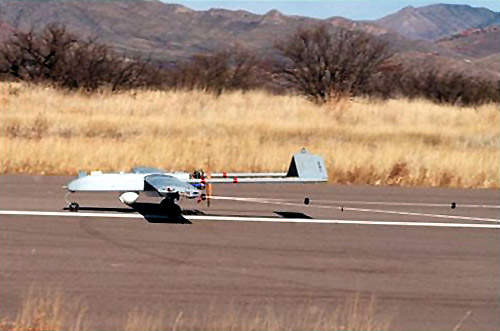 As well as conventional wheeled landing, Shadow can also land with an arresting hook on the air vehicle and ground-based arresting cables. 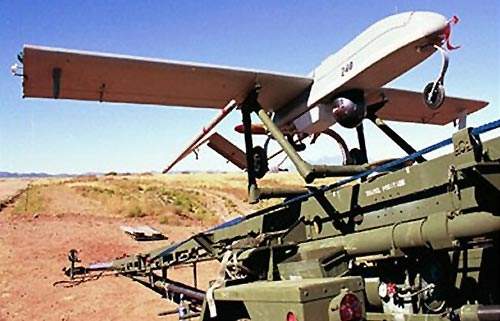 The Shadow TUAS can carry payloads up to 27kg, including a variety of sensors and electronic warfare systems, for up to seven hours.

The RQ-7 Shadow 200 is the smallest of the Shadow family of unmanned aircraft systems developed by AAI. It is in operational service with the US Army and US Marine Corps.

Shadow 200 is used to locate, recognise and identify targets up to 125km from a brigade tactical operations centre. The system recognises tactical vehicles by day and night from an altitude of 8,000ft and at a slant range of 3.5km. Imagery and telemetry data is transmitted in near-real time from the Shadow ground control station to joint stars common ground station, all-sources analysis system and to the army field artillery targeting and direction system.

Shadow is in operational service in Afghanistan and in Iraq. By July 2012, the Shadow system had amassed 750,000 flight hours.

The Shadow family of unmanned aircraft systems is produced at AAI’s facilities in Hunt Valley, Maryland. AAI Corporation is an operating business entity of Textron Systems.

In 1999 the US Army awarded AAI Corporation a low-rate initial production (LRIP) contract to develop the Shadow tactical unmanned aircraft system (TUAS). The Shadow TUAS carries the US Army designations RQ-7A and RQ-7B, although all RQ-7A model aircraft have now been retired and replaced by the RQ-7B model. The system provides brigade commanders with improved capability in target acquisition, battle damage assessment and battle management.

At the beginning of 2001, AAI delivered the first four Shadow TUAV systems ordered by the US Army and built under the LRIP phase of the programme.

“The Shadow family of unmanned aircraft systems is produced at AAI’s facilities in Hunt Valley, Maryland.”

The US Government conducted a series of demonstration trials under the Operational Tempo (OPTEMPO) programme at Fort Huachucaa, Arizona during 2001. The systems were then transferred to Fort Hood in Texas for the US Army to carry out initial operational test and evaluation (IOTE) trials.

In March 2002, AAI received a contract valued at $22.3m to extend TUAS production, bringing the value of the TUAV programme to $135m. The contract covered the production of five additional Shadow systems. The first full-rate system was delivered to the US Army in September 2003. Shadow was deployed to Iraq in January 2004.

In the first quarter of 2004, the US Army ordered 33 Shadow systems with over 140 air vehicles and delivery of the longer-range RQ-7B was started by August 2004.

Also in June 2007, it was announced that Shadow 200 would replace the Pioneer UAV in US Marine Corps service. Two systems were ordered for the USMC and entered service in November 2007.

By January 2010, the US Army, Army National Guard, Army Special Forces and Marine Corps had ordered a total of 116 Shadow 200 systems. Over 91 Shadow systems were delivered by January 2010.

In May 2010, Saab awarded $31.4m contract to provide two Shadow 200 systems and associated services for the Swedish Armed Forces.

In July 2010, AAI Corporation received a $64m order from the Italian Army for four Shadow TUASs.

“Shadow 200 is used to locate, recognise and identify targets up to 125km from a brigade tactical operations centre.”

The air vehicle system can be transported by two military wheeled vehicles and can be operated round-the-clock from unprepared sites by the 22-soldier crew. The Shadow TUAS can carry payloads up to 27kg (60lb) including sensors and electronic warfare systems.

Larger variants of other Shadow aircraft with a larger fuselage and wingspan are capable of carrying payloads up to 45.4kg (100lb) with minimal impact on cost or performance.

The air vehicle is of composite structure. Its compact size and small engine produce a very low radar and infrared signature, making it very difficult to detect.

The original RQ-7A air vehicle has a wingspan of 3.89m and carries a maximum payload of 25.3kg. The maximum endurance is five hours 30 minutes. The RQ-7B is a longer-endurance version, with increased wingspan of 4.27m and larger tail unit, payload up to 27.2kg and endurance of six to seven hours, depending on mission profile.

A new wing design developed for the aircraft expands the wingspan to 20ft. It will increase Shadow’s payload capacity and endurance from six to nearly nine hours. The Shadow TUAS fitted with new extended wings completed its first flight in April 2010.

The air vehicle is powered by a UEL AR 741 rotary engine developing 28.3kW and driving a two-bladed pusher propeller. Fire and explosion-resistant fuel cells are installed in the wings. The RQ-7A and the longer-endurance RQ-7B models have a fuel capacity of 40l and 57l.

The US Army Shadow 200 is fitted with the POP-200 or POP-300 lightweight electro-optical system supplied by IAI Tamam.

The system is two-axis gyro-stabilised and fitted with forward-looking infrared (FLIR) and CCD TV sensor array. It can be fitted with a laser rangefinder and target designator and is capable of correlative automatic target tracking.

BAE Systems has supplied five Aurora Generation IV remote sensing systems to the US Army for use on the Shadow 200. The systems provide target detection and wide-area surveillance, using daytime hyperspectral imaging from high-resolution electro-optic sensors.

In February 2008, it was announced that the Falcon III AN/PRC-152 radios, supplied by Harris Corporation RF Communications Division, were installed in Shadow 200 UAVs. The radios, which have SINCGARS capability, act as part of a relay system to extend the communication range for ground troops with obstructed line-of-sight.

Under contracts awarded in October 2008, 50 US Army systems were fitted with laser designation systems and the Tactical Common Data Link (TCDL).

Shadow 200 is equipped with WESCAM 11SST (Step-Stare Turret), a lightweight EO payload. This payload provides a unique capability to rapidly cover a large area. The sensor captures seven video frames per second, images are compressed and streamed to the control station, where they are tiled together to create a hi-resolution digital image of a large area. 11SST covers up to 300km2 per hour, from an altitude or distance of 4,000m.

The Shadow 200 can be catapult launched from a hydraulic rail launcher. The guidance of the air vehicle can be pre-programmed before take-off or remotely controlled during the flight.

“The Shadow air vehicle can be pre-programmed before take-off or remotely controlled during the flight.”

The Shadow TUAS air vehicle can use a conventional wheeled landing on a flat surface about 95m in length. An alternative recovery method uses a deployable arresting hook on the air vehicle and ground based arresting cables.

CDL Systems, based in Calgary, Alberta, was contracted to develop the vehicle control system software. The ground control station (GCS) is a sheltered ruggedised portable system with a suite of vehicle control and C4I interface software. The ground control segment of the system has been developed by AAI using pre-existing and proven hardware and software components. The software was modified to meet the operational requirements of the TUAV programme.

The rugged transit cases are easily transported and allow the PGCS to be rapidly set up and torn down in the field. The ground data terminal (GDT), that includes transmit and receive units and an antenna system, is easily set up without tools.

The PGCS and GDT are used to control the launch of the air vehicle, operation of the payload, the reception and display of the downloaded data from the sensors on the airborne platform and for the recovery of the air vehicle.