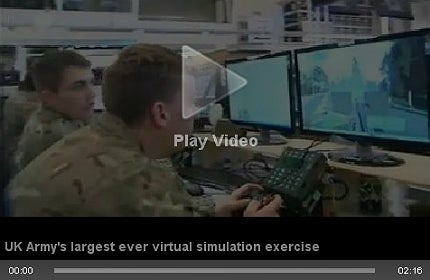 Military exercises conjure up all kinds of imagery, with the most common perception being soldiers forced to carry heavy machinery around a remote field in miserable conditions, designed to test their resolve in preparation for combat. Urban Warrior 5, The British Army‘s largest ever virtual simulation exercise, may have changed that perception.

Modelled on a purpose-built combat village in northern France, the exercise used advanced science and technology as part of a cutting edge experiment, aimed at providing UK soldiers with a better understand of not only future battlefields, but future weaponry.

Up to 190 soldiers fought and completed scenarios at the Land Warfare Centre, located in Warminster, UK, with their actions captured by the simulation software. This data has been compiled by Dstl, and will be analysed and presented to ranking officers to inform future decisions.

"The simulation differs from other exercise techniques given its ability to introduce new variables, such as a new weapon system."

The simulation differs from other exercise techniques given its ability to introduce new variables, such as a new weapon system or tactics, in order to assess how those variables could or are likely to influence the result of an operation. Favourable results from a particular one over others could change how squadron leaders act in certain scenarios, while at the same time should an exercise prove a weapon’s use in the field it could potentially save lives.

Army Force Development director Brigadier Simon Deakin said: "This experiment gives us a unique view into what is required for the British Army to operate successfully on future operations. By testing our soldiers in a number of demanding scenarios we can determine the optimum tactics, equipment and training that are required for us to shape the army of the future."

Minister for Defence Equipment, Support and Technology Philip Dunne echoed Deakin’s sentiments, adding: "Science and technology has a crucial role to play in growing our understanding of the battlefield. Evidence gathered from this experiment will be used to guide decisions on the type of equipment we need to fight conflicts in all terrains. Simulation is playing an increasingly important part in delivering cost-effective training solutions across all our defence domains."

Accurate, but not realistic

Included in the Urban Warrior 5 exercise was the newly upgraded Warrior Vehicle, something which UK soldiers have no hands-on experience of using given that it is not currently in the UK Army’s inventory. The simulation can accurately represent the vehicle within an exercise, allowing soldiers to identify the new capabilities, adapt to them and learn how to apply them in any given scenario.

"It should be noted that this form of realism isn’t the intended purpose of the simulation."

Although the army could indeed have the new Warrior represented in a live exercise with little trouble, it cannot achieve the same level of accuracy as the simulation can.

Detractors may argue that the system is not realistic. Instead of gearing up and launching a pretend offensive within a purpose-built complex in Europe, soldiers are sat in a comfortable environment acting as they would in real life using a games console remote and a television screen. Officers can monitor their progress while enjoying luxuries like a cup of coffee, which they wouldn’t be afforded on a range.

It should be noted, however, that this form of realism isn’t the intended purpose of the simulation. Instead of the ultra-realism provided by live action exercises, the simulation technology can efficiently and cost-effectively gather evidence to inform future decisions. Rather than replace current techniques, the exercise is intended to complement them, forming a comprehensive educational experience from which soldiers should learn from.

Welsh Regiment section commander Corporal Jeremy Appiah said: "The exercise is an excellent way to develop our mindset from what we have learnt in Afghanistan to future conflicts. The simulation phase will help ensure we are better equipped and prepared in years to come."

The Electronic Warfare Market in the United Kingdom to 2025: Market Brief