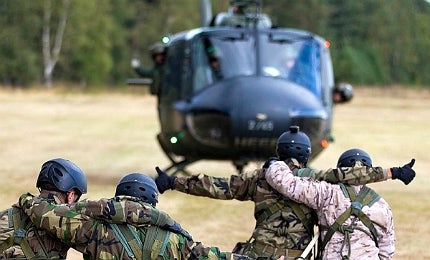 The air is as heavy with tension as it is with rain. The high-value target holed up in an innocent-looking house in Belgian woodland seems oblivious to snipers of the Special Forces hidden among the trees, or the F-16 that flies overhead capturing mission intelligence.

He can’t have failed to notice the Italian A-129 attack helicopters taking out a vehicle-mounted gun emplacement, attracting his attention to the diversionary force inserted by fast rope from an Italian Chinook CH-47 hovering overhead.

At the same time, the real assault force delivered by two German UH-1Ds breaches the door and captures the target, escorting him away in the same helicopters.

Fortunately insurgents aren’t rife in the Belgian countryside, and the scenario is a European Defence Agency (EDA) exercise, Green Blade, part of its helicopter training programme running alongside the Pegasus Special Forces exercise.

Taking place during a three week period, the 2012 iteration of the Green Blade exercise involved 550 personnel from Belgium, Italy, Spain and Luxembourg. It is regarded as a particularly effective event, especially at a time of rapid international military change, with the withdrawal of coalition forces from Middle East conflicts and the US downsizing its NATO role in response to severe defence cuts.

"The 2012 iteration of the Green Blade exercise involved 550 personnel from Belgium, Italy, Spain and Luxembourg."

The participation of EDA member states in such exercises aims to demonstrate the agency’s mandate as part of a larger picture, driven by its objectives to pool and share resources and knowledge, an aim which is ever more important at a time of financial upheaval and an unpredictable international environment. Lessons learned from Afghanistan showed that even the best-trained troops from different militaries can take months to work cohesively as a mission-specific coalition force, and exercises such as Green Blade could dramatically reduce that lead time.

Green Blade is fully resourced to continue these exercises up to 2022; the next one will be in Portugal in July 2013, but while the value to smaller and less well-equipped nations is indubitable, will the UK loosen its ties with the US with the dissolution of the coalition and grow closer to its European cohorts?

RAF Wing Commander Andy Gray, manager of the EDA’s helicopter programme, hopes that the planned drawdown in 2014 will offer opportunities for the UK to plan how it carries out contingent planning for future operations alongside its European neighbours.

"Lessons learned from Afghanistan showed that even the best-trained troops from different militaries can take months to work cohesively."

"I would hope the UK is going to start sending helicopters to exercises," he says. "I think there’s a perception in the UK that we are lukewarm about the EDA – our active participation isn’t talked about a lot. But from a personal perspective the EDA provides quite good value for money and we could be used to better effect if we wanted to."

Despite the perception, the UK has been an active participant, and at an exercise in Portugal in June 2011 it sent a helicopter instructor and led a mission of 32 helicopters, two F-16s, one C130 and an AWAC.

"The UK hasn’t done that at home for 20 years," says Gray. "So is there something for the UK here? Yes."

Gray was recruited to his EDA role in September 2008 when the agency’s pooling and sharing drive was yet to be articulated as a motto but already underscored its way of working. "Pooling and sharing is a natural habitat – we were doing it before anybody decided it would be a good initiative to pin to a banner," he says.

However, Gray is keen to point out that the EDA is not configured to carry out joint acquisition programmes, leaving that to organisations such as OCCAR, the intergovernmental European Organisation for Joint Armament Cooperation.

The EDA’s role lies more in identifying and harmonising requirements, and pinpointing solutions. "At that point we then work with our partners to deliver those solutions, whether that’s a league nation or a multinational like OCCAR, but we have to have someone else to deliver it, we just don’t have the resources," he says.

People, the EDA’s most important asset

Perhaps this is why Gray believes the EDA’s most important asset is its people. "You can build any institutional structure you want, but if you don’t get the people in it, it’s going to fail. This is about expertise: it’s about having the passion, knowledge and drive to make things better. If you haven’t got that, it won’t matter what you write on the founding charter; nothing will happen."

""Pooling and sharing is a natural habitat – we were doing it before anybody decided it would be a good initiative to pin to a banner.""

Pooling and sharing would seem to be intuitive aims for an organisation such as the EDA, but what was unusual at Green Blade 2012 was the emphasis on establishing friendships. During conflicts, people do extraordinary things in extraordinary conditions, not necessarily for flag and country but for a comrade in the next foxhole.

"The technical term is ‘small unit cohesion’; you fight for the person next to you, not for someone 6,000km away who you’ve never met," says Gray. "I think that this community, this mutual trust is one of the major benefits of the Green Blade programme. Yes we’ve looked at techniques and procedures, but we’re now meeting each other again and again. The European Helicopter Force is quite small, so if we bring in new generations and keep inculcating that same message, then it’ll just grow exponentially." 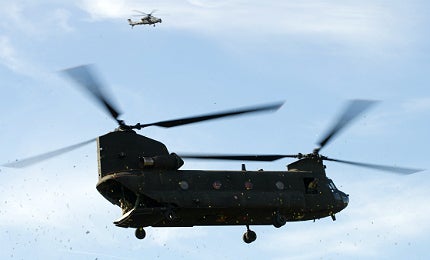 However worthy the goals of pooling, sharing and front-line comradeship, the diverse aims and assets of the EDA’s member states mean that nothing can be achieved without negotiation.

The element of compromise recognises that the value of comradeship extends beyond individual combatants to the very member states of the EDA. "That’s why neighbours compromise," says Gray. "If you trust someone you’re willing to discuss matters; if you don’t then everything stays shut. Again, it’s all about people."

Relaxing after the day’s successful exercise, the smiles, handshakes and camaraderie among the air crews of different nations show that trust, compromise and comradeship could indeed be exactly what EDA exercises such as Green Blade are all about.

The European Defence Agency (EDA) is driving this agenda, directing collaborative projects outside of the wider Nato remit by focusing on the interests of member states.

We talk to Erich Weissenböck and Benjamin Fuchs of the European Defence Agency.