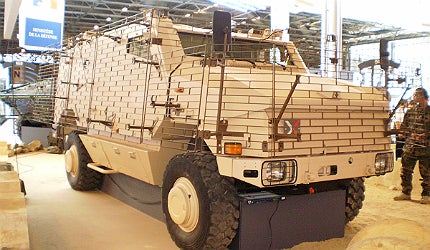 The European Defence Agency (EDA) is driving this agenda, directing collaborative projects outside of the wider NATO remit by focusing on the interests of member states. At a presentation on EDA’s Future Land Systems study, EDA chief executive Claude-France Arnould said this era of budget restrictions and looking to new theatres is a critical moment for defence.

“Perhaps more so than at similar shows, the host country France put on an impressive display not just of its internationally-respected arms industry, but also of the technology developed and deployed by its armed forces.”

“There is a strong political drive to cooperate acknowledging at an international level that there is no alternative given the financial situation,” she said.

“We need to propose technology that is mature, not just words, and act early in those domains to face current problems with existing technology.”

Pooling and sharing of resources is key to this approach, applying not just to land systems but to other major programmes affecting the continent, including air-to-air and ground-to-air missile systems.

With severe cuts to the US defence budget underway, the US is looking to the EU to carry the lion’s share of the Nato burden. Arnould said that that the EDA must acknowledge that, to change this mindset, it needs to take a longer-term approach to programmes.

Land capability is key to the new operational role the EU is taking on. Led by BAE Systems, the Future Land Systems programme brings together 17 manufacturers across the member states. Not only could it improve capability, but it could be a step towards improving finances in the defence industry.

“Land systems are the most deployed of all defence systems, producing €16bn in revenues and directly supporting 90,000 jobs,” Arnould said. She also highlighted the fact that the sector accounts for 25% of all defence expenditure and that the current fragmented nature of the industry highlights the need for co-operation.

By the time of the next Eurosatory, not only will the Future Land Systems study be well on its way, but the collaborations announced during the show will be fielding results. Hopefully these will demonstrate that pooling and sharing of defence resources will bring benefits, not just in systems better suited to future battlefields, but also as a much-needed financial boost to the industry.

Unlike many of the other major defence trade fairs which sometimes spread themselves thinly across land, air and air, Eurosatory concentrates very much on land systems.

“Led by BAE Systems, the Future Land Systems programme brings together 17 manufacturers across the member states.”

Accordingly, the floors of the exhibition centre and the outdoor arena were liberally furnished with the latest armoured vehicles developed by all the major manufacturers. Each had been honed to best counter asymmetric warfare in recent Middle-Eastern theatres by all the major manufacturers, and some were the result of Urgent Operational Requirements (UORs) when the commissioning armies discovered its existing vehicles were not up to the terrain or attacks.

However, speculative traffic around the stands was slow and few new contracts were announced. With the drawdown underway for Nato forces in Afghanistan, cash-strapped armed forces are reluctant to invest in vehicles designed to counter insurgents in desert and mountainous regions when the nature of any future combat is hard to pin down. A representative from Supacat suggested that some ministries were only looking to replenish fleets at European bases.

With the world’s attention shifting to the Asia Pacific region, Australia is one country that is reluctant to slow down investment in new kit, including in armoured vehicles. Thales Australia unveiled its Hawkei vehicle at the show, with the emphasis firmly on adaptability to any situation it finds itself it.

A relative lightweight, the seven-ton modular vehicle can be deployed by helicopter and comes in command, reconnaissance, liaison and utility variations. The interior can be fitted with a variety of COTS electronics specific to each crew-member’s requirements.

Thales Australia recently signed a contract with the Australian Department of Defence to deliver six prototypes under the LAND 121 phase 4 programme, which will acquire 1,300 new light protected vehicles to replace the current Land Rover fleet.

“Unlike many of the other major defence trade fairs which sometimes spread themselves thinly across land, air and air, Eurosatory concentrates very much on land systems.”

Perhaps more so than at similar shows, the host country France put on an impressive display not just of its internationally-respected arms industry, but also of the technology developed and deployed by its armed forces.

The stands of manufacturers such as Thales, Nexter, EADS (incorporating Airbus Military, Eurocopter and Cassidian), MBDA and DCNS were easily matched by those of the French Army, Ministry of Defence, procurement agency Direction générale de l’armement (DGA) and government military research agencies.

One such agency, the French national aerospace research centre ONERA, emphasised the crossover into civilian applications. The innovations it displayed at the event included Decawatt, an exploratory research project to develop a micro-compact gas turbine that delivers 100W, yet is small enough for use in robotics, UAVs and electronic infantry equipment.

It has also developed an optical parametric oscillator (OPO), which can detect and identify dangerous gases at a distance using infrared laser spectroscopy.

The DGA themselves showed off equipment being trialled and fielded by the French Army. Lighter weight than the US Army equivalent, the Hercule exoskeleton (or ‘exosquelette’ in French) uses patented technology to respond to the wearer’s body movements and will eventually have the capacity to carry up to 100kg.

The MILLICAM system promises to transform Special Forces raids in urban environments with its ability to detect and create an image of people behind a wall passively, without emitting radiation, making it hard to detect.

Eurosatory – the shape of things to come?

The global economic downturn and specifically the eurozone crisis may have meant contracts were thin on the ground at this year’s Eurosatory event, but it has driven manufacturers towards innovation and versatility, which can be no bad thing in the longer term.

The Maritime and Border Security Market in the UK to 2025: Market Brief