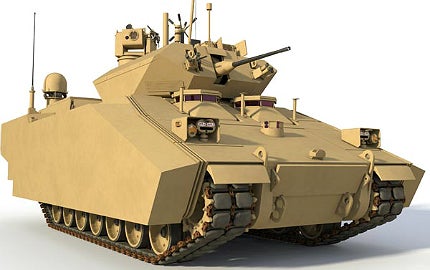 BAE Systems and Northrop Grumman released details of their proposed vehicle for the US Army’s Ground Combat Vehicle programme, to be powered by a hybrid electric drive propulsion system for economic fuel use.

A ten to 20% improvement in fuel economy is possible without compromising power, as an HED GCV can accelerate from 0mph-20mph in just 7.8 seconds, which a mechanical GCV would require 10.5 seconds to reach.

“We are committed to a world without nuclear weapons, but more needs to be done,” said Browne. “We won’t make progress if we don’t take responsibility.

“China is currently going through military modernisation, with no clear indication of how this will shape their strategic capability, but we do know that they are delivering and modernising their nuclear arsenal,” Browne added in a statement.

Despite a general consensus that humanity should seek the end of nuclear weapons, members of the UN Security Council have raised concerns that disarmament would ultimately lead to more violence.

An escalation in the conflict between Israel and Gaza forced newly re-elected US President Barack Obama to put his foreign policy into action, attempting to ease tensions sparked by recent incidents.

“The White House reiterated Obama’s support of Israel’s right to defend itself from rocket attacks.”

Cross-border violence soared with the launch of rockets into Israel by militants in Gaza, prompting Israel to respond with air strikes which killed prominent Hamas member Ahmed Said Khalil al-Jabari.

The attacks marked an escalation in the conflict in the lead up to Israel’s elections in January 2013. Israel Prime Minister Benjamin Netanyahu initially warned that the ongoing operation against Hamas could be extended, with Israeli military spokesman Joshua Hantman informing the BBC that a ground offensive remained a possible option.

The United States was quick to respond, with President Obama speaking with Prime Minister Netanyahu and Egyptian President Mohammed Morsi to discuss the violence.

The White House reiterated Obama’s support of Israel’s right to defend itself from rocket attacks, but said the President urged Israel to make ‘every effort to avoid civilian casualties’.

Qatar and UAE request THAAD missile sales from US

Qatar and the UAE requested terminal high-altitude area defence (THAAD) missiles and fire units from the US Defense Security Cooperation Agency, highlighting the ongoing threat of a ballistic missile attack emanating from Iran.

Under the first FMS, estimated at $6.5bn, Qatar has requested the supply of two THAAD fire units with 12 THAAD launchers, 150 THAAD interceptors, two THAAD fire control and communications and AN/TPY-2 radars, as well as an early warning radar (EWR).

The second sale for the UAE, estimated at $1.135bn, covers the supply of 48 THAAD missiles, nine launchers, test components, repair and return, support equipment, spare and repair parts, personnel training and training equipment and other elements of logistics support.

Equipment sold will boost Qatar and UAE’s capabilities to combat a wide range of existing and future threats in their respective regions, while lowering the dependence on US forces.

The UAE and the UK announced intentions to create a long-term strategic defence partnership following a two-day diplomacy and trade visit from Prime Minister David Cameron.

A joint statement released by the countries confirmed the establishment of a “defence industrial partnership that involves close collaboration around Typhoon and a number of new technologies”.

UAE president Shaikh Khalifa bin Zayed Al Nahyan was quoted by Khaleej Times as saying that the bilateral partnership will include political, economic and defence collaboration in an effort to maximise benefits for both the nations.

“There is incredible potential for existing collaboration to act as a basis for much broader industrial partnerships and commercial initiatives,” Nayhan added.

BAE Systems and EADS announced a potentially groundbreaking merger, while the US was forced to suspend its JLTV programme.

Future of the Israeli Defense Industry - Market Attractiveness, Competitive Landscape and Forecasts to 2023

The Electronic Warfare Market in Israel to 2024: Market Brief