The Ground Combat Vehicle (GCV) programme has been initiated as part of the US Army’s modernisation efforts to deliver its armed forces with a next-generation infantry fighting vehicle.

BAE is one of two Prime Contractors working on the Technology Development Phase of the US Army’s Ground Combat Vehicle. The other Prime Contractor is General Dynamics Land Systems.

Details of the US Army’s GCV programme proposal

“In February 2010, the US Army issued a formal request for a proposal to the industry for a highly versatile ground combat vehicle.”

In February 2010, the US Army issued a formal request for a proposal to the industry for a highly versatile ground combat vehicle. The new vehicle should be able to carry nine infantrymen in IED-threat environments.

The programme calls for the completion of an early prototype vehicle by mid-2014 and the first full-up prototype by early 2016. The initial phase of the programme is being executed by the Program Executive Office set-up for the purpose.

The army will initially procure 1,874 GCVs of the winning design from one of the two contractors. The first production vehicle is scheduled to be rolled out in April 2018. The GCV should be inducted in to service in 2019.

The GCV being developed by BAE and Northrop Grumman will incorporate a space efficient modular steel core hull which allows combinations of armour packages. The flexible design can adapt new technologies according to the current and future combat scenarios.

The larger hull of the GCV can accommodate three crew members, nine infantrymen and their equipment. The vehicle will reduce life-cycle costs for the operators as it requires fewer resources for maintenance.

The GCV will have an overall length of nine metres, width of five metres and a height of three metres. The weight of the vehicle will be 63.5t.

The vehicle will be armed with baseline weapons including a 25mm auto-cannon and a 7.62mm coaxial machine gun. The commander will be provided with an independent weapon system. The unmanned turret fitted on the vehicle will offer better survivability to the gunner / operator and accept future weapon systems.

The vehicle will be equipped with a modern C4ISR (command, control, communications, computers, intelligence, surveillance and reconnaissance) system.

The open architecture and infrastructure of the vehicle will be able to adapt other existing and future C4ISR systems. 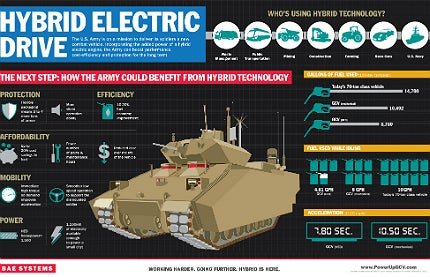 The GMR four-channel radio on the vehicle will allow communication and data transfers between ground vehicle platforms on-the-move.

The GCV will protect the crew from small arms fire, shell splinters, IEDs and land mines. The mine and explosively formed projectile (EFP) protection of the vehicle will be similar to or exceed the protection level offered by RG33 MRAP (mine-resistant ambush protected) vehicles. The GCV will be further equipped with armour kits for additional protection.

The GCV will be powered by E-X-Drive hybrid electric drive propulsion system. The compact and light-weight propulsion will deliver high power and torque.

“The GCV programme has been initiated as part of the US Army’s modernisation efforts.”

The vehicle will be equipped with the MTU Series 890 R6 engine. The electric drive propulsion will deliver ten to 20% more fuel efficiency than a conventional mechanical propulsion system.

The GCV will have a top speed of 75km/h and a maximum range of 300km. The suspension of the vehicle will be in-arm hydropneumatic. The vehicle will demonstrate high mobility to allow it to run effectively in urban areas and rough terrains.

BAE Systems, as the prime contractor, will offer overall programme management and systems integration for the GCV’s demonstration.

The company will also provide vehicle design, structure and logistical support, as well as the readiness and sustainment of the platform.

Northrop Grumman will be responsible for the C4ISR systems. QinetiQ North America will supply the electric drive propulsion system. Engine and battery systems will be provided by MTU and Saft Group respectively. L3 will supply the suspension units, while iRobot will deliver the unmanned components of the GCV.