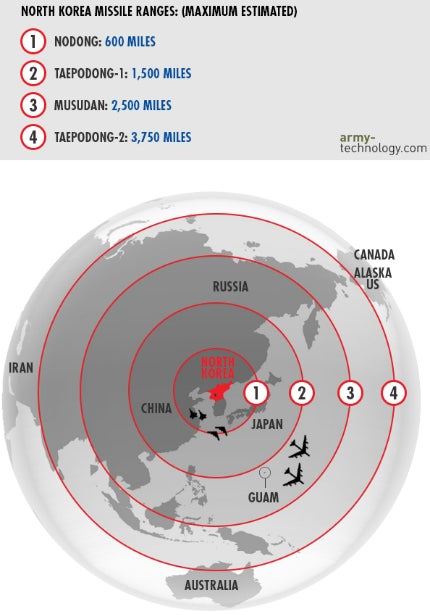 Seoul is on high alert as analysts believe North Korea is likely to carry out a missile test launch on 15 April, as part of celebrations for the 101st anniversary of the birth of the Great Leader Kim Il Sung. From satellite images of transport and preparation, the most likely candidate is the mobile medium-range ballistic missile, dubbed Musudan, after the village nearest the launch site, but also known as Taepodong X, Nodong / Rodong-B or Mirim.

Despite the regime’s threats against US territories, its longest-range missiles are largely unproven following a series of unsuccessful tests, and the country is not thought to have developed a nuclear warhead small enough to be missile-mounted. However, the launch of a three-stage rocket carrying a satellite in December 2012, possibly based on Taepodong-2 missile technology, was condemned as a cover for a missile test.

More under threat are North Korea’s immediate neighbours, notably South Korea and Japan, and the defences they and the US have put in place reflects this mounting concern. Foreign ministers gathered in London for the G8 conference have condemned North Korea’s threats, and demanded a halt to nuclear weapon development.

At best, the capabilities of North Korean missiles are an estimate, with analysts basing range, fuel types and warheads on satellite imagery of weapon transport, test launches, and in some cases military parades, hence published statistics can vary wildly.

“The BM35 Musudan is an intermediate range ballistic missile based on Soviet technology.”

The BM35 Musudan is an intermediate range ballistic missile based on Soviet technology given an extended range by increasing the size of the liquid fuel tank and with a triple warhead replaced by a single one. It is conveyed to a launch site aboard a Korean People’s Army MAZ-547A/MAZ-7916 transporter erector launcher, and fuelled on-site. It is believed to have a range between 1,500 – 2,500 miles and deliver a payload weighing up to 1,250kg. A test-firing of the Musudan missile would violate UN Security Council resolutions, banning North Korea from nuclear and missile activity.

Japanese analysts have suggested North Korea is sowing seeds of confusion by moving multiple missile platforms around the peninsular. The same satellite images that identified launch preparations for Musudan have also detected multiple launch platforms for small missiles being moved in and out of a warehouse facility in Wonsan on the east coast. These launch vehicles are the type used for Scud or Nodong missiles.

Also known as Rodong, the short-range Nodong has a range of around 600 miles when armed with a 1,000kg payload, and its poor accuracy has led analysts to assume it would best be used for attacks on a large target, suggesting its suitability for a nuclear warhead.

The other missiles in North Korea’s armoury are the Scud-derived intermediate-range Taepodong-1, with a range of 1,250 to 3,700 miles depending on payload weight and whether a third stage is used, and Taepodong-2, which offers a similar maximum range. However, these are not believed to be part of current preparations.

The US prepares for war to keep the peace 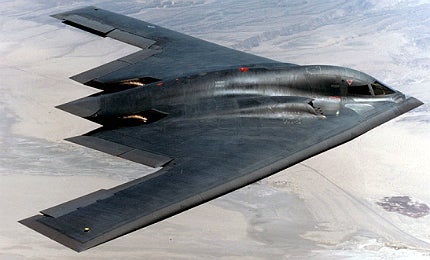 Depending on your point of view, America’s countermeasure deployment and rigorous training exercises in the region could be seen as a show of strength, appropriate preparation, or as provocative in their own right as Pyongyang’s manoeuvres.

The US Air Force (USAF) has deployed F-22 Raptor stealth fighter jets and B-2 Spirit bombers to Osan Air Base in South Korea for training exercises, where both aircraft have been participating in regular sorties. Capable of speeds of more than Mach 2, the Raptor has been a mainstay of the USAF since 2005. Its three internal weapons bays can carry a total or eight short and medium-range missiles, or some of the medium-range missiles can be replaced with a bomb rack. The USAF’s venerable nuclear-capable B-52 bombers, with ranges of 8,000 miles, have also been undertaking flying drills near Guam.

The US military has deployed Sea-Based X-Band Radar (SBX), which resembles a giant golf ball atop a floating oil rig, off the coast of Japan, where it could track incoming missiles from North Korea. The 50,000 tonne, US$900m platform is crewed by 80 personnel and has a radar range of 1,200 miles.

“Despite the regime’s threats against US territories, its longest-range missiles are largely unproven.”

A Terminal High Altitude Area Defence (THAAD) system, designed to shoot down short, medium and intermediate range missiles in the terminal phase at a range of 200km or less, has been deployed to Guam. Developed by a team of defence industry giants led by Lockheed Martin, the US$800m THAAD employs hit-to-kill technology, using the kinetic energy of impact to destroy incoming missiles.

The Pentagon has also added a further 14 Ground-Based Midcourse Defence (GMD) missile interceptors to the 30 already in Alaska to intercept incoming ICBMs in space, and has suspended a planned test of the nuclear-capable land-based LGM-30 Minuteman ICBM due to the current tensions.

“The US Air Force (USAF) has deployed F-22 Raptor stealth fighter jets and B-2 Spirit bombers to Osan Air Base in South Korea.”

While the US has taken the lead in preparing defences against North Korean aggression, the country’s regional neighbours have not been resting on their laurels.

Having opted out of the US-led global missile defence system, South Korea is set to deploy an independent low-tier missile defence system in July. The Korea Air and Missile Defence System (KAMD) has been under development since 2006, combining Patriot missiles and long-range early warning radars to track and shoot down low-flying, short and medium-range missiles.

The Japan Self-Defence Force has deployed Patriot Advanced Capability 3 (PAC-3) anti ballistic missile systems in Tokyo and is bringing forward plans to install further systems at two military bases in Okinawa by the end of the month.

While North Korea’s rhetoric may be blustering, and any planned missile test is no augur of imminent war, the regime’s refusal to abide by global constraints means the international community’s response is proportional and justified. Better safe than sorry.

In the years since the break up of the Soviet Union, Britain has played – and continues to play – a critical role in nuclear disarmament and non-proliferation.

Defending Down Under: how Australia plans to protect its resources