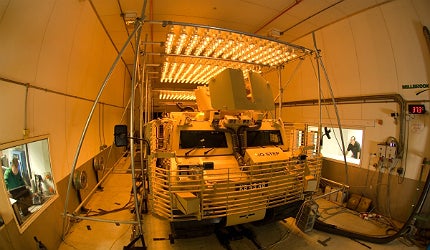 Berenice Baker: When was Millbrook founded?

Julian Bryan: Millbrook was first designed by Vauxhall and Bedford Truck with construction beginning in 1968 and operations [starting] in 1971. From the start it could accommodate four ton trucks, which offered the potential for testing military vehicles.

To exploit this, they replicated the capabilities of the Ministry of Defence (MoD) Chertsey test facility, and although they didn’t do big tanks, they did all the trucks and armoured cars.

JB: There is no other proving ground even remotely like Millbrook. It is located on the side of an escarpment in the lowlands of Bedfordshire so there are a lot of large hills, which is good not just for military vehicles but also electric vehicles, which find them a challenge.

It’s a purpose-built proving ground with an overall area of 700 acres, 50-60km of tarmac and around the same off-road, and high-speed bowls.

Military is about one third of the business. In a good year we’ll do about 11 million kilometres of driving and durability work.

BB: What do you offer specifically for military vehicles?

"Military is about one third of the business. In a good year we’ll do about 11 million kilometres of driving and durability work."

JB: The biannual Defence Vehicle Dynamics (DVD) show has been running since 2003, and I was responsible for its organisation.

One of the problems that I discovered was we didn’t have any military work at all. As we had facilities for trucks anyway and lots of off-road, we could cope with the size and capability.

We designed the facilities around operational requirements. For instance, military vehicles go down a pot-holed and bombed road, see a suspect item and have to swerve over [to] the other side of the road without reducing speed, so they could be mounting a nine-inch kerb at 20mph. Manufacturers wanted to know we could test these things so we replicated them.

BB: How do military testing requirements differ from commercial?

JB: In the commercial world new models come along every four years or so, but they share a lot of the elements of their predecessors, so you can put your lessons learned into the next model. They are designed to last a certain number of years then start to fail; otherwise no-one would make any money from new cars.

"Every alpha male thinks he knows how it works because it’s just another car, but they wouldn’t assume the same about a ship or an aircraft."

The MoD or government can’t replicate that because they only buy vehicles once in a blue moon. They bought the MAN truck 30 years ago, and you wouldn’t expect a car you bought to last more than 30 years.

Commercial vehicles are designed to do 100,000 miles a year in a constant way, but in the military they do a tenth of that, if they are deployed at all. So we apply engineering sense and take how things are done in the commercial world and try and design repeatable tests for the military, designed around how people actually use them.

There is also a problem of perception in military vehicle testing. Every alpha male thinks he knows how it works because it’s just another car, but they wouldn’t assume the same about a ship or an aircraft.

JB: We’re completely agnostic. When we carry out tests for the manufacturers, the MoD believes what we say. We have developed our facility working closely with the MoD, and anybody can come and rent our facilities and say "tested at Millbrook".

We will do comparative tests for the military and that information will belong to the military, and when manufacturers employ us, we do it for them, using military standard tests if they want, and they can choose whether to share the results with the MoD or keep private.

BB: Do you have a reciprocal agreement with countries that have other environments manufacturers need to test in, like sand and snow?

"We have developed our facility working closely with the MoD, and anybody can come and rent our facilities and say "tested at Millbrook"."

JB: You need both environment and structure, so you can say you’re testing it on the same terrain, but now it’s really cold.

We can replicate some of the component tests here and tell you whether you air conditioning works at -40°C, or whether sand and dust will ingress into important parts, but that’s not the same as running it in those environments.

We have proving grounds in North Sweden for snow, ice and cold, and in American deserts for hot and sandy that we can use any time we want, but their structural inputs aren’t necessarily going to be the same because they haven’t necessarily invested in that the way we have.

BB: How do you support manufacturers through other phases such as blast testing?

JB: Because we do crash testing, we have anthropomorphic dummies and instrumentation we can supply to the likes of DSTL and others for them to do the blast testing. Millbrook is a one-stop shop, and though we won’t profess to be the experts in everything, we can recommend people who can do other types of testing.

BB: How many of each model do you test?

JB: Sometimes there is just one, and we have this fear of breaking it. If you take a core programme like the MAN truck, it goes through a growth stage.

They do all the changes to the vehicle to make it British, test it to see what needs to change to get the required reliability, and by the time its gets to the stage we’re happy with it, we might have tested five vehicles. Then it goes to the reliability demonstration stage where you take a selection of vehicles that are production intent and test four or five those. In the commercial world you’d multiply those numbers by ten.

Throughout production you have Production Reliability Acceptance Testing (PRAT) in which you take a selection of vehicles off the line to check they still do what they are supposed to. This is no different to the quality testing carried out on commercial vehicles or, in fact, any product at all.

BB: What is a typical programme for Millbrook?

JB: For a capital programme we put together the automotive requirements document for the vehicles based on the historical knowledge we have from previous programmes and how people are using the vehicles.

"We’ve spent the last ten years saying it’s not a luxury; it’s an absolute necessity that armies have vehicles that are as reliable as your car."

We support the government in developing the pre-qualification questionnaire (PQQ) which identifies what vehicles are capable of doing the job, but we don’t get involved in the bidding process.

We run the reliability growth trials, reliability demonstration trials, and then track trials on all those vehicles as an authority independent of both the manufacturer and the government. That includes anything to do with the vehicle, so although we’re not experts in blast activity, we give the vehicle to people who are.

That normally doesn’t happen in an Urgent Operational Requirement (UOR), but by the time we got to the Husky they realised we should do some of the same testing we do for the corporate world. With previously deployed vehicles there’s some authority as there are a lot of reports out there. But if you buy an untested vehicle you’re shafted for [the] next 20 years. Independent testing is vital.

BB: What would be your message for any manufacturer thinking of skimping on military vehicle testing?

JB: Historically, commercial testing has been far more thorough than military testing, covering hundreds of thousands of miles rather than dozens. We’ve spent the last ten years saying it’s not a luxury; it’s an absolute necessity that armies have vehicles that are as reliable as your car going down the road, especially with lives at stake and the logistical challenge of getting parts to the front line.

If you want independent vehicle evaluation and test, we’re your boys.

Manufactured by Navistar Defence, the Husky is a medium-armoured high-mobility tactical support vehicle (TSV) based on the International MXT model.

Military spending cutbacks have forced significant deals out of the 2012 Farnborough Air Show.