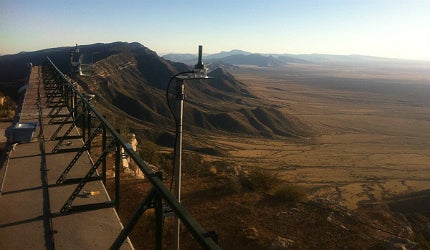 When geolocation services are required, the US Government’s space-based Global Positioning System (GPS), which first became fully operational in 1994, enjoys a brand identity not too dissimilar from Hoover and Coca-Cola.

The system’s premise, the ability to provide precise location and time information where satellite signal can be received, has revolutionised US Department of Defense (Dod) operations since its inception. Having become the envy of other global superpowers, equivalent systems such as Russia’s GLONASS and Europe’s Galileo soon appeared.

Now, the US is very much looking toward the future. The US Congress decision to modernise GPS in 2000 put into motion what is only now being realised. Successor satellites, such as GPS IIF-2 and IIF-3, have been launched, complementing and enhancing satellite operations and availability.

Location on the ground

In spite of this modernisation, satellite availability and difficult terrains can often throw a spanner into the works. Cities and natural canyons aren’t particularly conducive to GPS satellites, while walls and ceilings shelter soldiers from signal just as much as they do the elements. To solve this end, the US DoD has been investigating technology capable of filling these coverage gaps, culminating in the installation of LocataNet’s positioning system at White Sands Missile Range in New Mexico, US.

The LocataNet system works by utilising a series of transmitters installed at the site, with the Master transmitter time synchronising itself to an internal GPS. Other transmitters then synchronise themselves to the master transmitter without the need of an atomic clock. Transmitting four signals in the 2.4GHz ISM band, the receivers use a standard GNSS Base Station and a corrections network to provide accurate positioning within the area.

While providing GPS-like capabilities in areas out of satellite reach, the system is also comparatively cheaper to run and maintain than GPS. Locata Global Business Development manager Paul Benshoof explains: "The system is more expensive to deploy, with the transmitters needed to be installed on the range, but the receiver is smaller physically in comparison to the rack of equipment needed for GPS. It’s cheaper to use on a day to day basis."

Proving potential in the pits

Locata’s system hasn’t just been plucked for military use, however. "Our biggest use is actually in open pit mining. The drills in such mines need to possess a 10cm degree of accuracy and have used GPS to achieve that, as long as there’s been a signal," said Benshoof.

"While providing GPS-like capabilities in areas out of satellite reach, the system is also comparatively cheaper to run."

"Signal availability is lost quickly and, once its lost, surveyors need to be called in to assess the situation and mines have wasted money waiting for the surveyors. Locata has been combined with Leica Geosystems to improve the availability of a location service, with that provision of service rising from ten percent to almost 90% when the combination is used."

The combination has been deployed in two pits at Australia’s Boddington Gold Mine, located in Western Australia, with positive results. Four semi-permanent fixed LocataLite sites and eight mobile trailers provide signal for Locata receivers installed on ten drills and two shovels, providing the machinery with the requisite accuracy to operate.

"It keeps drill rigs working, and realised $1m of a return on investment within one month. The system pays for itself very quickly," added Benshoof.

From mining to military

"The US Army has since tasked the company with demonstrating its ability to provide non-GPS location services."

Locata’s success in the pits didn’t go unnoticed. The US Army has since tasked the company with demonstrating its ability to provide non-GPS location services at its White Sands Missile Range. Using ten transmitters, Locata established a network covering 3,500 square kilometres and delivered positioning accuracy to an aircraft flying at an alitutde of 25,000ft. The accuracy provided, 6cm (horizontal) and 15cm (vertical), exceeded expectations.

Locata’s demonstration fell under the US Air Force’s Ultra High Accuracy Reference System (UHARS) project, tasked with providing a highly accurate reference solution for airborne and land-based vehicles operating in electronic warfare environments where GPS signals are jammed as a result of friendly or hostile systems.

With signal jamming becoming more and more prevalent, particularly with hostile forces such as Iran developing and deploying their own equivalents, the need to operate under such circumstances is becoming more pressing.

"As great as it is, GPS doesn’t work everywhere. It doesn’t work indoors – it was never designed to – and it doesn’t work in urban environments where you have skyscrapers blocking the signal. Natural canyons have also proved problematic," Benshoof adds, contributing towards the list of GPS ailments.

This need for a back-up to GPS in such situations has long troubled the DoD, without any such solution coming forward that’s capable of providing the necessary coverage. "The Department for Homeland Security has indicated a need for back-up to GPS, but hasn’t really indicated one solution. It’s labelled several band-aids for the situation, but none of them have really been robust enough to provide a back-up for the whole system." Benshoof does believe, however, that Locata is capable of just that.

Benshoof is quick to point out, in spite of Locata’s relative success, that it isn’t about to replace the GPS system that the US has spent billions of dollars launching and renovating, stating: "We never designed Locata to replace GPS, that’s the benchmark, but we’re interested in filling the gaps." The aim is more to fill those gaps, with Benshoof likening the GPS coverage to a block of Swiss cheese.

But even without these forecast improvements, the system possesses the potential to change how nations envisage fulfilling their need for location services, particularly those outside of the Superpower bracket.

"Nations are reliant on GPS. Russia has its Glonass system, Europe has Galileo and China’s equivalent is almost ready. Looking at those nations, they’re all superpowers, so only superpowers are able to deploy that capability. The other 200 countries need to rely on them for that capability, but Locata can provide an equivalent system that’s under their control. That’s a game changer."