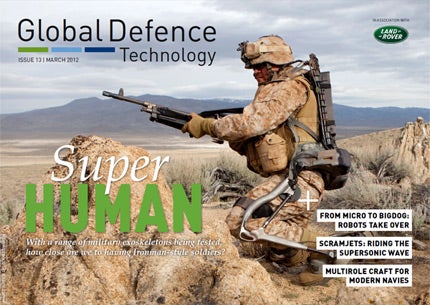 Science-fiction is increasingly turning into science-fact as research teams develop robotic-armoured suits which could give soldiers almost superhuman capabilities. Although early models suffered from serious limitations due to weight and mobility issues, companies such as Raytheon and Lockheed Martin are now taking advantage of new materials and some potentially battlefield-ready concepts are being tested by the US military. In this issue we explore the technology behind these exoskeleton suits and find out if the idea of an Ironman-style soldier could become a reality.

Army
Capable of carrying out a range of missions from ISR to ordnance disposal and combat, an army of robots has found its way into the theatre. We round the top military robots in use today, profile Boston Dynamics' groundbreaking BigDog robotic mule, and look at new ideas for micro bots that could become an essential part of every soldier's equipment.

Air force
Successful tests of the US Air Force and Boeing's X-51A Waverider aircraft have given new blood to the scramjet concept. We explore the technology behind supersonic engines and take a look at the development of the X-51 scramjet demonstration aircraft and its success to date.

Navy
The rise of the multirole vessel has mirrored the evolving nature of maritime power in the 21st century. We find out how high-tech craft, capable of undertaking various missions, are becoming the mainstay of modern navies, and zoom in on the Royal Navy's Global Combat Ship programme for the development of new multirole warships.

Logistics is critically important to the military - lives are at stake with every decision. With budgetary constraints and new missions placing significant demands on logistical support, we investigate how commanders and contractors can achieve safer, more efficient operations.

We also look at the latest soldier technology, zeroing in on sniper equipment and innovative body armour, talk to Lockheed Martin, BAE Systems, and Elbit Systems about their latest UAV developments and how they work with the military to fulfil the latest requirements, and find out how the Royal Navy's £108m Maritime Composite Training System could revolutionise naval training.