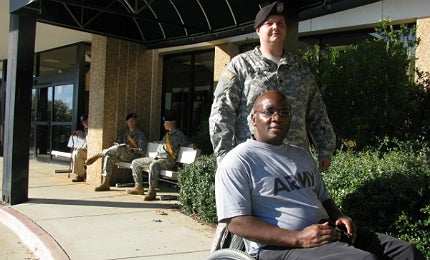 Now the bunting has been taken down and the tickertape swept up, Obama must quickly address the issue of unemployed veterans; a potential epicentre of controversy, where the issues of unemployment and defence cuts meet.

"The US Bureau of Labor Statistics (BLS) reported that joblessness for post-9/11 veterans runs at ten percent."

Just four days before the election, the US Bureau of Labor Statistics (BLS) reported that joblessness for post-9/11 veterans runs at ten percent, two percentage points higher than the national rate.

Founder and CEO of Iraq and Afghanistan Veterans of America Paul Rieckhoff condemned the figure as unacceptable, saying: "As a nation we’ve invested billions in making our men and women in uniform the best trained in the world. But with fewer and fewer Americans serving, the civilian workforce does not have the institutional knowledge to understand how valuable our veterans truly are."

This disappointment combined with an unpopular war still underway meant election support for the Obama administration from the military was no mean feat. This was due in no small part to the sway the president holds over the youth vote – he secured the support of 60% of the under 30s, the demographic of most serving troops.

Up against it: budget cuts bite hard

Military bases reported that while older service personnel for the most part remained staunchly Republican, more young members of the armed forces voted Democrat. The armed forces vote can be a big decider for counties with a strong military presence.

"The Pentagon faces more than $450bn in cuts during the next ten years."

This could change as US deficit reduction measures bite hard, threatening many military jobs. The Pentagon faces more than $450bn in cuts during the next ten years, with another $500bn to potentially following at the beginning of 2013, after a congressional committee failed to act on finding budget savings last year. This could result in a ten to 15% reduction in US Army and Marine Corps headcounts over ten years, equivalent to tens of thousands of troops.

"The armed forces vote can be a big decider for counties with a strong military presence."

Another window of opportunity blew shut when, in September, Congress shelved Obama’s proposal to create a Veterans Jobs Corps to stem high unemployment among recent military veterans, as Republicans were unwilling to accept the five-year $1bn cost. As part of the scheme, veterans would have been hired to work on federal public lands projects and would have established a network of job training centres.

In his acceptance speech, Obama pledged support for military personnel and veterans, and to help create jobs for the unemployed.

"You’ll hear the deep patriotism in the voice of a military spouse who’s working the phones late at night to make sure that no one who fights for this country ever has to fight for a job or a roof over their head when they come home," he said.

But with many believing that responsibility of keeping veterans in employment and housing should lie with Obama’s administration, a third term seems unlikely if he can’t deliver.

Cyber security is, for the first time, high on the agenda of election issues being addressed by the US presidential candidates.

The Soldier Modernization Market in Israel to 2025: Market Brief