Should the situation in Syria deteriorate beyond the resolve of diplomacy, one of the greatest barriers to military intervention remains the threat of biological attack. Assad’s regime has been forthright in its admission regarding the possession of chemical weapons, sparking vehement condemnation from world leaders.

An increasing fear is that these biological agents could not only be used against troops acting on behalf of the UN, but on innocent Syrians as a means of deterring international intervention. With the civilian death toll of the Syrian uprising continuing to rise, it has become imperative that such an act be prevented.

Military intervention in Iraq and Saddam Hussein’s penchant for mustard gas underpinned the need for troops to be readily equipped for such an attack, but now efforts have shifted to not only a matter of protection, but to adequate detection. 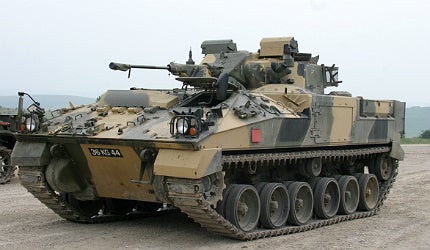 AzkoNobel’s paint has been tested on the UK’s Warrior fighting vehicle. Image courtesy of davric.

One such method that is currently being developed is a paint treatment for military vehicles. The UK’s Defence Science and Technology Laboratory (Dstl) has teamed with chemical company AkzoNobel to develop an absorbent paint that can be painted onto vehicles, absorbing pathogens and hazardous chemicals from the atmosphere.

"With the civilian death toll of the Syrian uprising continuing to rise, it has become imperative that such an act be prevented."

The paint itself works like a sponge, attracting and absorbing toxins straight from the air that the vehicle passes through. Upon its return to base, the now-toxic coat can be peeled off and disposed of safely, with a fresh coat added before the vehicle returns to service.

Speaking on the development of the paint, Dstl Hazard Management and Decontamination acting team leader Steven Mitchell told the BBC: "Ultimately, what we’d like to create is a coating that changes colour to indicate it’s been contaminated, decontaminates itself, then returns to the original colour when it’s clean."

While this is admittedly a long-term, but not wholly unreasonable strategy, recent developments have been made that could enable such a capability.

"One such method that is currently being developed is a paint treatment for military vehicles."

Developed by Dstl scientist Dr Peter White, the Integrated Multiplex Assay and Sampling System (IMASS) is capable of sampling up to eight targets simultaneously, including powder, liquids or surfaces, and is expected to be employed by first responders in security sectors in the coming months.

"This invention combines a mature, established detection technology [similar to that used in pregnancy test kits] into an integrated handheld device that could be used by a generalist front line operator wearing protective clothing," said White. White has cited existing devices as failing to properly integrate sampling and detection technology, with some devices not being capable of being used easily by operators wearing gloves.

"It also has a multitude of applications in the wider diagnostic area," said Lamotte. "Discussions with potential customers, both within the UK and further afield, have generated significant interest and anticipation for the launch of the final product." 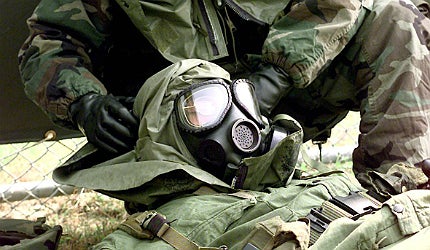 The threat of nerve gases has triggered many militaries into examining novel detection techniques. Image courtesy of the US Air Force.

While homeland security may have triggered Dstl into action, instability on the Korean peninsula has had a very similar effect on scientists in South Korea. Scientists at the Seoul National Laboratory have published results affirming the success of a new sensor, built from polymer nanostructures, capable of detecting extremely minute concentrations of nerve gas in the air.

The new sensors use nanotubes of an inexpensive conductive polymer called PEDOT, and double its surface area by coating the nanotubes’ surfaces with vapour. By adding hydroxyl groups to PEDOT sidechains, the polymer is capable of interacting with organophosphates such as sarin, changing electrical resistance. This resistance can be measured, alerting operators to a potential pathogen in the air.

During testing, the tubes coated with nanorods were capable of detection changes in resistance at concentrations as low as ten parts per trillion, roughly equivalent of two to three orders of magnitude more sensitive than previously tested sensors.

In comparison to mass spectroscopy-based devices currently used by soldiers, sensors using these polymers would not only be more sensitive, but less expensive and lighter. The next stage in the sensor’s development will see it paired with a power source and other necessary components into a wearable device.

With nerve gases being colourless, odourless and tasteless, the timely detection of such pathogens before they become a risk continues to be the biggest obstacle of protecting not only soldiers, but the general public. Protective clothing risks being rendered futile if gases cannot be identified.

"Instability on the Korean peninsula has had a very similar effect on scientists in South Korea."

Litmus-like paper sensors currently being developed by the Unviersity of Michigan could provide a potential answer, while also remaining financially feasible. A paper published by University of Michigan Materials Science and Engineering associate professor Jinsang Kim details the development of the equipment-free, motion-free and highly sensitive technology.

Combining a group of atoms from a nerve gas antidote with a molecule that changes colour when it comes under stress, the atoms bind to nerve gas present in the air and change colour when activated, turning the paper from blue to pink.

Although not as sensitive as the sensors being developed in South Korea – the paper can detect the presence of nerve gas at concentration of 160 parts per billion – it can still identify sarin before the concentration is deemed hazardous to humans.

The death of four senior Syrian officials in a suicide bomb attack has underpinned the need for renewed intervention.