A suicide bomb attack claiming the lives of four senior officials within Syrian President Bashar al-Assad’s regime has reinforced the need to resolve a conflict that is increasingly spiralling out of control.

With the UN security council set to meet in order to discuss the best course of action, politicians from East and West continue to differ their stances. With both the US and UK continue to push for a chapter VII resolution, which could allow military intervention, Russia and China remain vehemently opposed, citing its potential for increased bloodshed.

The USS John C. Stennis. Image courtesy of the US Navy.

US defense secretary Leon Panetta responded in the wake of news of the suicide bombing by telling reporters: "This is a situation that is rapidly spinning out of control."

Panetta further went on to call for nations to bring ‘maximum pressure on Assad to do what’s right to step down and allow for that peaceful transition’.

Prior to the bombing, it was announced on 16 July that the US would deploy its Nimitz-class aircraft carrier USS John C Stennis four months early, with the vessel now setting sail in September and remaining within the Persian Gulf until February 2013. The early deployment comes as part of US plans to maintain an increased military presence in the region amid increasing tensions not only in Syria, but also in Iran.

The carrier will be joined by the Ticonderoga-class guided-missile cruiser USS Mobile Bay and the Arleigh Burke-class destroyer USS Paul Hamilton, with all three vessels heading to the Persian Gulf instead of the Pacific Command area as originally planned.

US defense secretary Leon Panetta approved the early deployment after it was requested by US Central Command head general James Mattis. With USS John C Stennis in the Persian Gulf region, the US will maintain two carriers within distance of Syria and Iran for the next few months.

Pentagon press secretary George Little denied that the deployment was in direct response to the ongoing crisis in Syria, but did say that it was to address a ‘wide range of security interests’.

UK foreign secretary William Hague condemned the blast, with the Press Association reporting Hague to have said that the incident ‘confirms the urgent need for a chapter VII resolution of the UN security council’.

The attack comes just two days after Hague made a renewed call for a UN Security Council resolution to warn Syria of ‘serious consequences’ after the nation breached the peace plan. During a visit to Libya, Hague said, "The situation in Syria continues to deteriorate alarmingly. We have seen even more terrible massacres in recent days."

"The British Government believes it is imperative to have a chapter VII resolution of the security council, which should mandate the implementation of the Kofi Annan peace plan and of a transitional government."

The UK has continually taken a tough stance on Syria, having forced a vessel carrying attack helicopters to Syria from Russia to return to its home port. The vessel was sailing off the coast of Scotland when it had its insurance withdrawn, forcing the ship to turn back. The incident sparked a wave of new criticism for Russia over the alleged shipment of arms to Syria in spite of an arms embargo being enforced upon the nation.

Russian support of Assad regime continues to be unwavering

Russia continued its support of the Assad regime by accusing the West of inciting Syrian opposition in the wake of the fatal suicide attack as Russia President Vladimir Putin met with Kofi Annan to discuss the ongoing conflict.

Russia remains vehemently opposed to a Britain-sponsored resolution, claiming that such a resolution amounted to support for the rebels would ultimately lead to increased bloodshed within the country. Russia Foreign Minister Sergey Lavrov was quoted by RIA Novosti as saying: "Instead of calming the opposition down, some of our partners are inciting it to go on."

A chapter VII resolution, while tied to non-military sanctions placed on the country, could eventually allow the use of force to end the conflict; Russia remains supportive of its ally, fearing a repeat of intervention similar to that seen following NATO‘s campaign in Libya.

In response, Russia has submitted its own ‘enhanced’ draft resolution as it seeks an end to the increasingly severe violence within the country. RIA Novosti reports that Russia is promoting a special envoy of Kofi Anna’s six-point peace plan, citing it as the only way to end violence within the nation. Speaking on Russian plans to support a UN envoy, Russia’s deputy ambassador to the UN Alexander Parkin said: "This idea has been discussed by Kofi Annan with the Syrian leadership in Damascus." 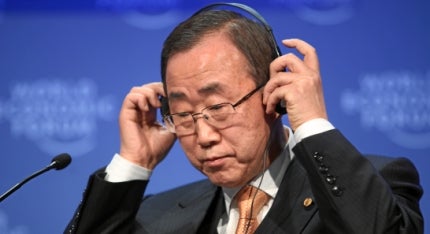 UN secretary general Ban Ki-Moon met with China President Hu Jintao prior to the suicide bombing in an attempt to garner support for Kofi Annan’s peace plan. "I have explained how serious the situation is now and all the leaders in China have also shared my view that this situation is very serious," Ban Ki-Moon told reporters following the meetings.

China is crucial to any prospective UN resolution regarding the Syrian conflict due to it possessing the power of veto. Russia has vowed to veto any Western-backed proposal for a chapter VII resolution, and China has twice joined Russia in vetoing intervention within Syria.

Following the meeting with Ban Ki-Moon, Hu Jintao issued a statement reaffirming China’s intention to ‘earnestly fulfil our international responsibilities and obligations’, but again warned against military intervention within Syria. "The life of Syria’s current political leadership can only be determined by the Syrian people," said an editorial within China’s People’s Daily.