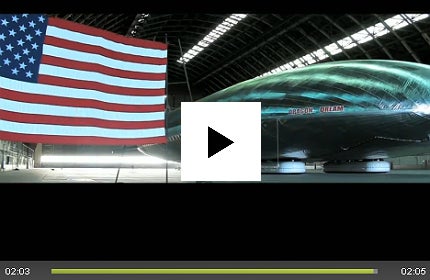 "The Aeroscraft is intended as a runway-free alternative to the Lockheed C-5B Galaxy."

Constructed as part of a $35m contract from the Pentagon and Nasa, video footage shows the 230ft-long, 36,000lb Aeroscraft prototype, named Pelican, moving under the control of ground crew while heavier than air.

The planned full-scale version will be a 450ft-long vehicle able to carry a 66-tonne payload of cargo more than a 3,000nm unrefueled range to remote areas inaccessible by current winged logistics aircraft.

Aeroscraft combines aeroplane and airship technologies into a rigid aluminium and carbon fibre helium-filled aeroshell. A buoyancy control system pumps helium between gas cells and pressurised tanks, varying the Pelican’s "static heaviness" by 3,000-4,000lb, in order to make it heavier than air for easier ground handling and cargo unloading, then releasing it for vertical take-off.

The Aeroscraft is intended as a runway-free alternative to the Lockheed C-5B Galaxy, the largest winged transport aircraft used by the USAF, with the ability to deliver supplies and equipment to remote undeveloped areas. The Galaxy has a 3,434-mile range and can lift more than 122 tonnes of cargo into the air, but requires a conventional runway of more than 8,000ft. 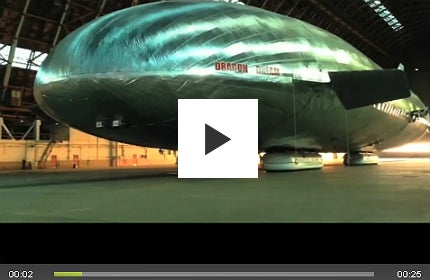 The planned full-scale version will be a 450ft-long vehicle

Under the contract, Aeros plans to carry out a further three tests over the coming week, including a vertical take-off and landing to a height of 10-15ft. These will be followed by cargo-carrying tests during the next few months, then an outdoor flight, though Pelican may need some modifications to meet Federal Aviation Authority (FAA) rules for flight testing.

During testing, Aeros CEO Igor Pasternak said: "The vehicle construction is complete and this is truly the beginning of a vertical global transportation solution for perhaps the next 100 years."

A full-scale Aeroscraft is scheduled to be delivered in 2016.

The modern military unmanned aerial vehicles (UAVs) that offer an invaluable contribution to battlefield surveillance and combat owe much to lessons learned from their predecessors, whether successful or otherwise.

Key headlines from 2012 include London’s Olympic security, conflicts in Syria and Israel and US President Barack Obama’s re-election.