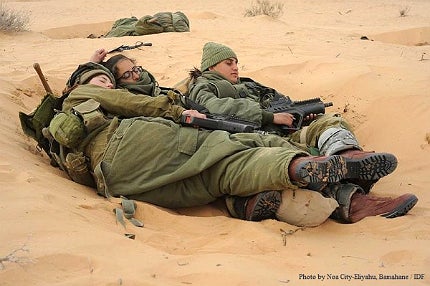 "Fatigue mitigation has evolved in the military over the past ten to 20 years as more and more research became available showing a strong association between poor sleep and greater safety and health risk," says Pat Byrne, founder of the company Fatigue Science and a recognised international expert in fatigue risk management.

As a result, he says, defence planners are now at a point where they fully understand the risks of fatigue and are moving into a ‘solutions’ phase – a view borne out by some of the research funding awards featured in recent announcements from the US Department of Defense.

"Defence planners are now at a point where they fully understand the risks of fatigue and are moving into a ‘solutions’ phase."

One such project at Washington State University has received a three-year grant of a little less than $900,000 from the Office of Naval Research, to examine the effects of fatigue on attention and decision-making, while also investigating the role played by an individual’s own underlying biology.

Part of ongoing research into the effects of sleep deprivation on cognitive function being undertaken at the university, it could ultimately result in more efficient staffing of naval ships and help improve how protracted periods of 24-hour operations are managed.

According to the team’s leader, Hans Van Dongen, this latest work builds on two earlier findings; it seems response to sleep deprivation is a highly personal thing, being very largely influenced by each individual’s biological make-up, and also, at least in part, dependent on the nature of the task to be done. Van Dongen, a research professor with Washington State’s Sleep and Performance Research Center, has teamed up with two cognitive scientists, a military operational task expert and a clinical physician in an attempt to develop a personalised, task-specific, fatigue prediction modelling tool.

The research team have devised an experimental approach to determine how participants in the study approach decision-making by having each one perform a set of ‘attention tasks’ before, during and after a period of sleep deprivation. Then, using this, the team will attempt to predict how an individual will respond to a series of simulated scenarios while fatigued – including some which involve decisions about the use of deadly force.

Bottom up – or top down?

When faced with decisions about a situation which develops over time, it seems people generally adopt one of two approaches; bottom-up deciders wait until they have all the information to hand, while top-downers reach an early decision, and then check its accuracy as subsequent data comes in.

Place these two groups in a high-fidelity shooting simulator, and present them with scenarios in which the use of a firearm may, or may not, be justified, and according to Paul Whitney, one of the cognitive scientists on the team, the different effects of fatigue should really begin to show up.

Being able to predict how individuals are likely to respond in any given situation once they have become sleep deprived, and then using that information to minimise the resulting risk, can play an important part in fatigue mitigation.

"Response to sleep deprivation is a highly personal thing, being very largely influenced by each individual’s biological make-up."

However, as James C. Miller writes in his CRISP report, ‘Fatigue Effects and Countermeasures in 24/7 Security Operations’ for the ASIS Foundation: "The most effective countermeasure for fatigue is to do as much as possible to prevent it from occurring in the first place."

Detecting the problem as it first threatens to develop is, nevertheless, not always easy. A number of studies have shown that one of the first faculties to suffer at the onset of fatigue is the brain’s ability to recognise its own impaired working, meaning we quickly become poor judges of just how much tiredness is affecting our performance.

This is further complicated by the fact that while we are acutely aware of the effects of significant sleep deprivation when it happens quickly, over a few days, chronic lack of even an hour or two’s sleep over a more protracted period tends to pass relatively unnoticed.

With sustained, round-the-clock operation now the norm, and more and more personnel needing to communicate in real-time with all areas of the globe, finding ways to mitigate the worst effects of fatigue has been steadily rising up the military agenda.

"We met recently at Fort Detrick with the US Army Surgeon General and her staff. Their emphasis was clearly on finding solutions to assist soldiers and their families in the areas of sleep, fatigue, nutrition and exercise," says Fatigue Science’s Byrne.

Deciding on appropriate solutions, such as predicting fatigue response, can often require a large element of personalisation.

Byrne says the causes of poor sleep often varies between groups, and between individuals within those groups, so it is important to discover the underlying cause – some biological issue, work scheduling, travel, lifestyle choices or other contributory behavioural or environmental factors.

"Once the cause or causes of the fatigue is known, then fatigue mitigation or solutions can be employed," he says.

"Studies have shown one of the first faculties to suffer at the onset of fatigue is the brain’s ability to recognise its own impaired working."

The simplest, and arguably the most effective of these, lies in trying to find innovative ways to make time for personnel to get some rest – and increasingly research shows that some sleep, no matter how little, is better than none at all.

According to work at the Walter Reed National Military Medical Center in Bethesda, cognitive performance drops by around 25% per 24-hours of sleep deprivation; taking just a 30-minute nap cuts that about 18% over the same period. In a life-and-death situation, that extra seven percent could be an important margin.

Fatigue is not a new problem; it has been recorded throughout the history of warfare and was probably a feature of military life even before the messenger Philippides made the first-ever Marathon run – and then, or so the story goes, promptly collapsed and died from exhaustion.

However, the nature of modern war-fighting and national security operations means it is no longer just an occasional companion on the campaign trail – it is an inevitable consequence of these 24/7 demands, and one that is here to stay.

As Byrne puts it, "fatigue is a symptom, not a disease."