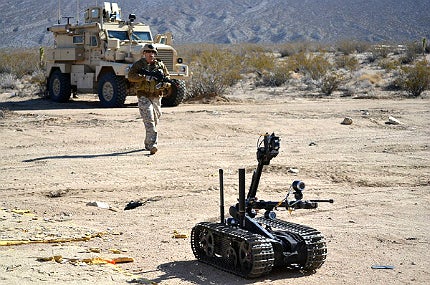 The mainstay of operation for most robots to date has been teleoperation – relying on a human ‘driver’ to navigate the device at-a-distance through dynamic and complex environments. The long-term goal, however, is to equip military robots with much greater levels of on-board decision-making capabilities – and perhaps, ultimately, even full autonomy.

According to Lt. Col. David Thompson of the US Marine Corps, and project manager at the Robotic Systems Joint Program Office: "We are moving along that spectrum from tele-operating to semi-autonomy where you can send a robot from point A to point B without any intervention."

As the US embarks on research to upgrade its fleet of tactical robots to enhance their capabilities and effectiveness, teleautonomy – independent intelligence, but with human guidance – could prove a major milestone in that journey, but there are technical and practical constraints to overcome on the way.

The big challenge for autonomous robotics

"For defence applications, the big challenge and opportunity is creating a system that both performs and is low cost," says Jorgen Pedersen, founder, president and CEO of the specialist Carnegie Mellon spin-off defence contractor, Robotics Engineering Excellence (RE2). "Military robot operators, such as Explosive Ordnance Disposal (EOD) technicians, require increased dexterity and strength to perform their tasks more effectively and efficiently, but at the same time, defence budgets are reduced."

Data, insights and analysis delivered to you View all newsletters By the Army Technology team Sign up to our newsletters
"For defence applications, the big challenge and opportunity is creating a system that both performs and is low cost."

Conventionally teleoperated robotic systems rely on their operators’ knowledge and awareness of the complexity and unpredictable nature of real-world environments to enable them to move around and perform their required manipulation tasks. The effectiveness of the man / machine team is, consequently, largely dependent on the human’s ability to judge what is going on remotely, based on the available feed from on-board cameras, and the engineering design of the robotic manipulator.

Scroll to the other end of to Lt. Col. Thompson’s spectrum, and, the theory goes, a more independently situationally aware robot should cut much of the onus on human input, and allow it to leave behind much of its dumb ‘puppet’ role. Such robots, capable of quickly approaching, grasping and manipulating objects confidently amid cluttered surroundings, would undoubtedly be literal life-savers in their EOD role. Achieving this in practice, however, poses some significant multidimensional challenges, not just for the component robotic elements – the mobile platforms and grasper arms – but for the control and communication system too.

As Pedersen explains: "A robotic arm is only as useful as your ability to control it. Current control methods – traditional gaming joysticks, for example – are not practical for controlling highly dexterous manipulation systems [such as] an arm that has more than seven degrees of freedom, and especially systems that have two robotic arms."

RE2 has been developing intuitive control devices for highly dexterous dual-arm systems to help overcome the limited ability that current EOD robots have to handle awkward or oddly-shaped objects.

"RE2 has been developing intuitive control devices for highly dexterous dual-arm systems."

In 2012, the company was awarded the Phase II SBIR competitive research contract to develop a 30lb (13.6kg), dual-arm solution for the US Army’s Highly Dexterous Manipulation System (HDMS) project.

While existing grasper arms struggle to unscrew lids, open bags and containers, or manipulate wires, particularly in tight spaces, this small, strong, two-handed manipulation system, with a total of 11-16 degrees of freedom, is intended to help both current and next-generation mobile robotic platforms perform better and faster.

Reducing mission time like this is not simply about greater time efficiency; it brings safety benefits for service personnel too, as quicker EOD obviously reduces the potential threat to soldiers on the ground, as well as the exposure of the teleautonomous robot’s driver, especially in forward positions.

"There is a paradigm shift within the military away from stove-pipe robotic solutions to open architecture, modular robotic systems," Pedersen says, and this has led to the interfaces and the requirements of each system being well defined, so that the components can be appropriately matched. "For example, the weight limit, reach, and centre of gravity of a robotic arm must be defined to match the corresponding robotic platform to ensure that the arm does not cause the platform to tip."

"Reducing mission time like this is not simply about greater time efficiency; it brings safety benefits for service personnel too."

The Advanced Explosive Ordnance Disposal Robotic System (AEODRS) programme of record, in which RE2 is participating, is leading this new approach, while other research projects aim to improve vital aspects of robot awareness, notably to allow them to navigate and monitor their own actions for themselves.

Nevertheless, the march to full autonomy is not going to be a quick one; Pedersen believes that it may be many decades before we will see truly autonomous systems being deployed.

In the interim, teleautonomy could come to represent the optimum trade-off between an entirely independent smart machine and full human guidance.

"Supervised autonomy offers significant benefit in the near term. For example, eventually an operator will be able to issue a command such as ‘open the door’ but in the nearer term, operators will issue commands such as ‘align gripper with door knob’ and ‘move toward doorknob’ – reducing the cognitive burden on an operator," he says.

The technology appears to be gathering momentum, as advances in sensor technology, robotics and control systems converge, and that seems set to drive some significant changes in the way military robots will function – and look – in the future.

Between now and then, Lt. Col. Thompson’s robot which can "go from point A to point B by itself, and tell me when it gets there" will itself become established as the new norm for IED-detection and EOD tasks, if the research currently being funded by the DoD and others goes according to plan.

Perhaps more to the point, with their smarter systems, enhanced dexterity and more effective machine / human collaboration, the coming generations of teleautonomous mobile manipulator robots should be capable of tackling increasingly difficult and sophisticated threats.