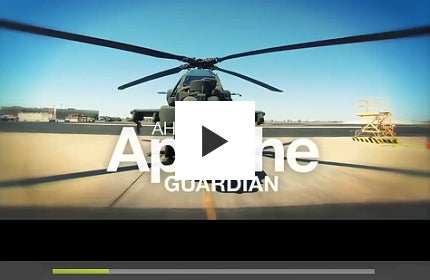 The reassuring thrum of the Apache’s rotorblades has become one of the most recognisable and reassuring sounds to foot soldiers on the modern battlefield. Known for their ability to survive combat damage and land safely, it is this reliable support role that Boeing is keen to promote in its new video featuring the AH-64E Apache Guardians.

According to Boeing, this latest version of the Apache features enhanced aircraft performance, joint digital operability, survivability and cognitive decision aiding, while reducing operations and support costs. The company started delivering AH-64E Apache Guardians to the US Army in October 2011.

John Schibler, Boeing chief engineer for Attack Helicopter Programmes, says: "We’re able to do more and more things with this platform that are just phenomenal that you wouldn’t even have dreamed of before."

"The company started delivering AH-64E Apache Guardians to the US Army in October 2011."

With integrated sensor suite networking, and digital communications for situational awareness, Apache crews are equipped to manage combat in real-time, and digitally transmit images and target locations to the joint operations battlefield commander."

"With the sensor the Apache carries today, we can see and spot the enemy any time, day and night, and they don’t even know we’re there," says Schibler. "They can’t see us, they can’t hear us, and you can transmit that information to the 19-year-old green-suiter on the ground looking at his hand-held device. So before he goes around the wall, he knows there’s a bad guy there."

One of the most important sources of situational awareness on the modern battlefield is the feed from unmanned aerial vehicles (UAVs), and from their unique position in the air, Apache crew members can operate and control them – technology first demonstrated in 2006. This is combined with the helicopter’s own data through an onboard command and control system.

"Apache crews are equipped to manage combat in real-time."

A lot’s going on when you’re in battle," says Schibler. "People are shooting at you, you’re getting information from stimulation overload. So what you need now is a system that can evaluate all those various stimuli coming in and prioritise them."

And although the UAVs are near-silent, Schibler is convinced their presence offers the same reassurances as the familiar sound of the Apache’s rotoblades.

"They can tell the sounds and the tone of an Apache when it’s in the area, and they’ve told stories that everything’s going to be OK because the Apache’s there," says Schibler. "So now he won’t even be able to hear the rotors, he’ll just know that they’re watching. Because it could be an Unmanned Aerial Vehicle watching, protecting and covering him and his buddies. How cool is that?"

The Apache AH Mk1 is an attack helicopter produced by AgustaWestland under license from Boeing, for the British Army.