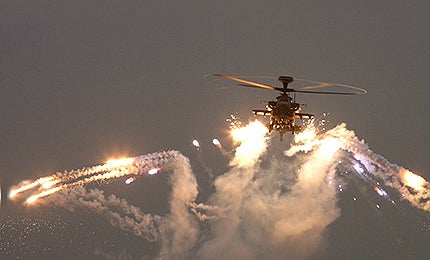 The Apache AH Mk1 is an attack helicopter produced by AgustaWestland under license from Boeing, for the British Army. It is a derivative of the AH-64D Apache helicopter, which is used by the US Army. The AH Mk1 was custom built to meet the mission specific requirements of the UK armed forces.

“The helicopters were extensively used in the Afghanistan and Libya conflicts.”

The UK Ministry of Defence (MoD) placed an order with AugustaWestland in April 1996 for the supply of 67 Apache AH Mk1 helicopters to its British Army. AugustaWestland, as a prime contractor, formed a team comprising of Boeing, Lockheed Martin and Longbow International (Lockheed Martin-Northrop Grumman joint venture).

The first Apache AH Mk1 prototype was produced in September 1998. The first helicopter was inducted into service in January 2001. Deliveries were concluded with the handover of the final AH Mk1 helicopter to the British Army in July 2004.

AgustaWestland was awarded a €480m ($715m approximately) Apache Integrated Operational Support (IOS) contract by the UK MoD in October 2009, to support the fleet of 67 Apache AH Mk1 helicopters of the British Army until 2014.

The Apache AH Mk1 retains the same airframe design of the standard AH-64D Apache, but with modifications to engines and mission systems. The major design changes include the integration of new foldable rotor blades, weapon systems, countermeasures, sensors and avionics equipment.

“The AH Mk1 is fitted with a nose mounted Boeing M230 30mm chain gun delivering a rate of fire of 625 rounds per minute.”

The crash-worthy fuselage was designed to withstand 12.7mm rounds. It can even survive the hits of 23mm high-explosive incendiary (HEI) rounds. The helicopter is also equipped with crash-worthy seats and a wire strike protection system for improved crew protection.

The Longbow FCR allows the crew to find, track and engage aerial and ground-based targets in all weather conditions. The onboard communication systems provide the Apache with command or attack co-ordination capabilities, through real-time data sharing of weapon systems and mission equipment.

Armaments on the attack helicopter

The AH Mk1 is fitted with a nose mounted Boeing M230 30mm chain gun delivering a rate of fire of 625 rounds per minute. The helicopter carries 1,200 rounds of 30mm ammunition for the gun.

The four multipurpose wing stations can be fitted with eight Hellfire air-to-surface missiles and 38 CRV-7 80mm rockets. The wing-tip AAM stations on either side of the fuselage can be armed with four air-to-air missiles. The Hellfire is equipped with semi-active laser (SAL) seekers. It can destroy hard, soft and enclosed targets within the range of eight kilometres. 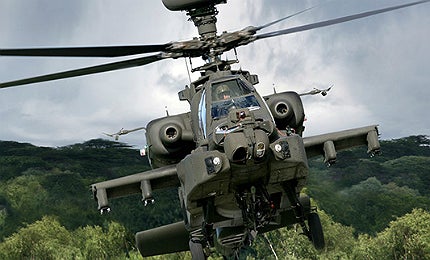 The Apache AH Mk1 is powered by two Rolls Royce-Turbomeca RTM322 turboshaft engines. Each engine develops a maximum take-off power of 1,566kW. The twin-shaft engine is controlled by a full authority digital engine control (FADEC) system. The helicopter has the fuel capacity of 1,421L. The cruise speed of the Ah Mk1 is 259km/h. The maximum range is 537km. The helicopter has an endurance of two hours and 45 minutes.

The UK Ministry of Defence (MoD) has a £1bn programme for the AW159 Lynx Wildcat, which is based on an upgraded version of the Lynx helicopter.