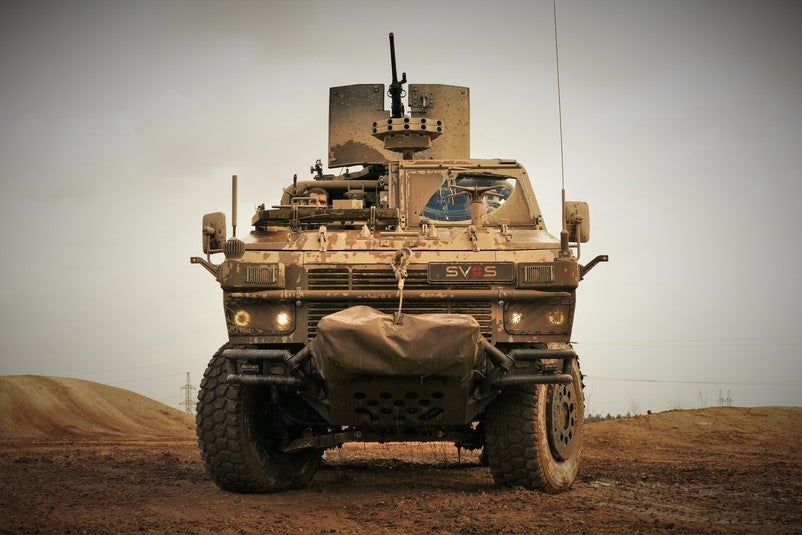 Is the threat level too high or the terrain too difficult? With Perun multipurpose military vehicle you can still focus on the mission. Due to the Perun’s unparalleled protection level and powerful drivetrain, your crew will be always safe and mobile. With more than 3,000 armoured cars produced by SVOS, the Perun reflects the company’s long and extensive experience in ballistic resistance materials design, development and production. We at SVOS know how hard the hit of a blast or armour piercing bullet can be and will do anything for you not to have to find out.

The Perun multipurpose military vehicle development was launched in order to address the global demand for vehicles with new standards in troops protection. With the constantly developing threats the protection has to evolve as well. With an ambitious aim to produce a brand new multipurpose military vehicle exceeding world protection standards, SVOS managed to introduce on the market a brand-new vehicle truly redefining the operators’ safety expectations.

The safety concept of the vehicle includes several patent-protected solutions and presents a sophisticated complex of matters allowing survivability of the vehicle after blast or ballistic impact. The protection was thoroughly tested by simulation as well as vehicle samples hits and full scope blast tests. The result is protection level in open-top variant which can guarantee no other vehicle on the market. As the SVOS General Director Mr Jaroslav Černý adds: “Perun in the open scout variant successfully passed the blast protection live tests of level no other scout vehicle was tested for yet and therefore it pioneers and defines the new standard of the blast and ballistic tolerance.”

The specially shaped vehicle body together with special blast deflecting and distribution shaping, new materials and blast-resistant seats allow to the crew to withstand even multiple blast threats, while the state-of-the-art body armouring utilising in-house produced ballistic glazing and armour allow the highest possible protection against rifle bullets. All the parameters of the vehicle protection were confirmed during full-scale tests performed by a German IABG test centre, a worldwide-respected and NATO-authorised laboratory.

The Perun vehicle was publicly unveiled for the first time in open-top variant designated for support of Special Forces. With impressive terrain throughput, unparalleled blast and ballistic protection and bulky internal space for all the mission equipment Perun still provides unbeaten firepower consisting of roof-mounted turret with primary weapon (up to 12,7 mm calibre machine gun or alternatively 40 mm grenade launcher) as well as of four 7,62 mm machine guns pintle mounts for 360° coverage of the area near the vehicle. For any Special Forces team the vehicle allows to carry enough of supplies and equipment for long-time missions including ATGMs or mortar with an option to fire directly from the vehicle.

With continuous development of the vehicle driven by significant market interest the vehicle will be at the DSEI presented with several new features. Among the most interesting safety features may be mentioned two examples of state-of-the-art development approach. As one of very few vehicles on the market it will be on the show displayed with an acoustic gunshot localisation system produced by a world leader of such technology, Netherlands based Microflown AVISA company. Mr. Černý comments such feature as a “significant increase of the crew situational awareness, which allows real time detection and localisation of rifle fire threats for quick counteraction or elimination. Due to the Microflown AVISA gunshot detector installed together with other defence systems such as wide wave band jammer the vehicle can be safely deployed in very dangerous environment with high risk of hostile fire engagement. And even in such conditions it will still provide to the crew the highest safety standard on the market. We are proud and appreciate Microflown AVISA support.”

As the safety is rather a complex approach at SVOS, the vehicle also focuses on new technologies introduction. For discreet threat elimination it will be equipped with non-lethal flash blinding LED lights manufactured by an Israeli top producer of such technology represented at the DSEI by BE1 Defence Technologies hub company. The installation of the lighting system on the roof turret allows 360° coverage of the vehicle surrounding and narrow focus on the threat. As Mr. Černý adds: “it can be used for multiple tasks from crowd or suspicious by-passers control or attacker approach elimination during urban combat operations up to protection against snipers in any terrain. The non-lethal system may be well used for active defence with minimised collateral damages. Cooperation with BE1 innovative solutions allows us to provide to our customers very early the best solutions available on the market.”

Although the Perun vehicle open variant will be displayed at the DSEI, SVOS is finalising a brand-new design of hard-top vehicle family member. It shall be publicly unveiled at the turn of the year and will again present a well-protected platform allowing fulfilment of wide variety of tasks of modern armed forces. Starting with troops transport, through the battlefield medical evacuation up to Command, Control, Communication, Computers and Intelligence missions, mine disposal tasks or anti-aircraft defence role. The internal electrical and hydraulics systems are designed for easy coupling with high energy and power outputs for powering the special systems. The roomy interior allows easy location of all the necessary mission equipment as well as comfortable and safe seating of the operators and soldiers. Regardless of the selected variant and role, all Perun vehicles inherited the unparalleled protection level and excellent driving capabilities.

VEGA – A New Generation of Protection at DSEi 2013