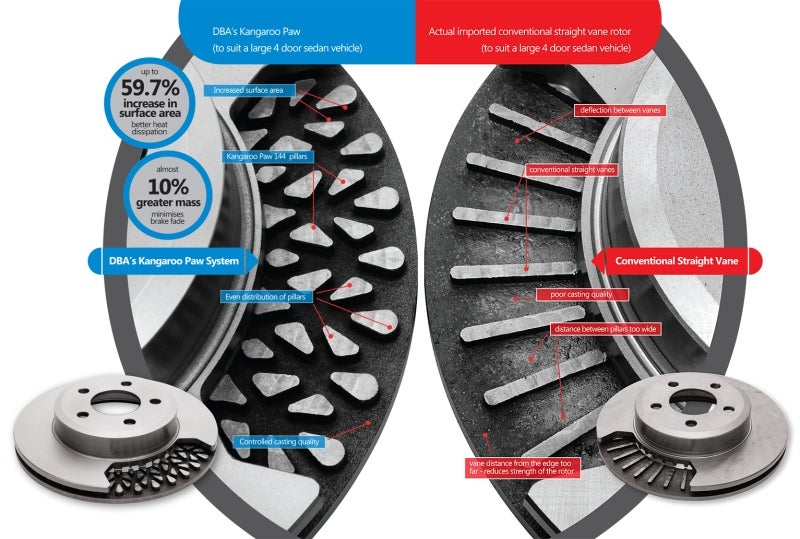 Inspired within Australia’s heartland, DBA developed the Kangaroo Paw cooling system. This patented ventilation system provides a much more efficient method of keeping the rotors cool under the heaviest of braking applications.

Using a series of 144 diamond and teardrop patterned pillars (or columns) instead of conventional straight cooling vanes, the design increases cooling efficiency by up to 20% when compared with most other conventional ventilated disc rotors.

As well as providing cooler conditions, the Kangaroo Paw system also provides additional support to the friction face. This enables the rotor to maintain the fine tolerances over the life of the rotor better than a straight vane design, which can ‘balloon’ and swell between the vanes when operating at high temperatures.

The Kangaroo Paw pillars are evenly spread across the disc face and make the rotor stronger, more stable and more consistent in operation.

The ventilation system of a brake rotor is best described as the foundation and support between the friction surfaces.

Other than material composition, another major factor that affects the thermal performance of brake rotors is the surface area within the ventilation design. The more surface area, the more heat that can be removed from the brake rotor.

The mass of the brake rotor also plays an important role. The greater the mass, the more heat that can be stored and must be dissipated, this is why the design of the Kangaroo Paw is so effective. This minimises the risk of brake fade and restores normal braking much sooner.