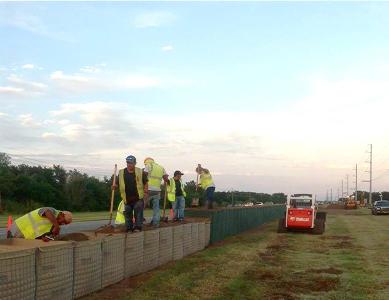 Tropical Storm Isaac is bearing down on the North Coast of the Gulf of Mexico, and Governor Bobby Jindal of Louisiana has declared a state of emergency.

Up to 12ft of storm surge is expected, according to meteorologists at National Oceanic and Atmospheric Administration.

Louisiana Highway 23, a vital transportation and evacuation route, is at risk. Plaquemines Parish and the Louisiana Department of Transportation have chosen to protect this vital communication link with HESCO Concertainer® units, their most trusted rapid flood protection system.

HESCO Concertainer units are also being used to close gaps in levee systems, and in other vital areas requiring reinforcement ahead of Hurricane Isaac.

Since Hurricane Katrina seven years ago, Louisiana residents have become accustomed to seeing HESCO barriers during times of emergency. The HESCO flood wall is the most robust, effective and proven fortification system available, and provides much needed protection and safety, as well as mitigating the effects of storm surge and excess rainwater.

HESCO Bastion is operating their Hammond, LA plant at maximum capacity to provide the protection Louisiana communities need. With Isaac quickly approaching, HESCO Technical Representatives are in south-east Louisiana assisting the US Army Corp of Engineers, the State of Louisiana and local flood fighting officials around the clock. HESCO representatives have their boots on the ground and are keeping a watchful eye on Isaac to be sure they can maximize protection, affording residents extra time to evacuate safely in areas that require it.