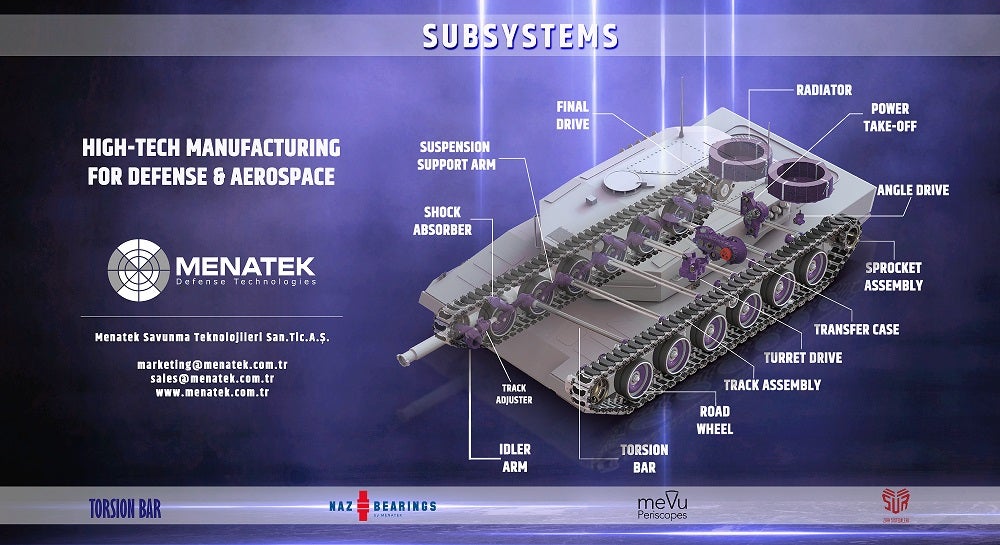 Menatek Defense Technologies is a high-tech manufacturer of systems and components for military vehicle platforms.

Components and sub-systems for vehicles and systems

The company specialises in the production of Suspension, Brake, Running Gear, Chassis, Powertrain, Heating and Cooling and Lubrication Components and systems of heavy-to-light tactical vehicles.

After being established in 1995 and starting off as a spare part supplier for the after-market of the Turkish Army, today Menatek has over 7250 different components in its inventory.

The company has a dedicated core team that composed of highly skilled individuals enabling complicated tasks. They focus on designing special products for military vehicles and high-tech industries. After all, the team has developed the first line of patented, self-lubricating bearings that can be adapted not only to combat vehicles but to various types of heavy wheeled vehicles and trains.

Test unit design and installation for product performance and lifecycle

Menatek designs, manufactures and installs test units for performance and lifecycle tests of components and systems.

According to client demand, the units can be either used by Menatek to verify product performance to be delivered to the customer or they can be installed to client facilities to serve testing multiple products of the same function.

According to client requirements, these test units can be designed as universal modules where the client can verify various types and versions of the same group of item.

Menatek Defense Technologies is the leading high-tech manufacturer and largest supply chain manager of Turkey and the MENA Region. The customer list is consisting of but not limited to international vehicle manufacturers as well as US Army, Turkish Army, NSPA and more.

Utilising 50 years of specialized know-how on heavy to light military vehicles, all types of tactical & combat platforms and its wide range of strategic suppliers; Menatek provides a comprehensive and effortless environment on manufacturing, testing and supplying for its customers.

Menatek specialises in the production of main systems and subsystems which are Suspension, Brake Systems, Running Gear, Powertrain, Hull, Turret & Chassis, Lubrication, Heating-Cooling. One of Menatek’s key speciality is superior supply management skills and high-quality standards. We are proud to say that all products and suppliers get inspected and audited by Menatek Defense Technologies accordingly with it’s ‘MDT Supplier Quality’ Standards.

Menatek is the leading high-tech manufacturer and largest supply chain manager of Turkey and the MENA Region.

Menatek's core team of R&D engineers have signed under another accomplishment and developed the Mono-Block...

Menatek manufactures hydraulic brake systems for armoured land vehicles. We can perform various tests and simulations at component and system level to verify endurance and performance of our manufactured products.

Menatek is the leading high-tech manufacturer and largest supply chain manager of Turkey and the MENA Region.

Working with the best suppliers in Turkey, Menatek tenders Turkey's complete manufacturing capability to its customers in order to deliver turn-key projects.

Menatek Defense Technologies is a leading supplier of the components and sub-systems for the International Defense Industry.

Any truly experienced observer of the armoured vehicle domain knows that the greatest innovations and the technical innovations with game-changing effect are almost invariably hidden from view – either buried in the bewildering array of electronic equipment said vehicles now carry or hidden deep inside the hull and it's myriad systems.

Recent global developments around the COVID-19, as Menatek Defense Technologies, we have an important medical support plan to fight against Covid-19 and the supply of the right quality medical products that we would like to illuminate all public.

Sur Armor Systems Are Ready To Save Lives

Menatek introduced its new product line, Sur Composite Armor Systems, at the IDEF’19 exhibition. With the introduction of a new lamination technology, exhibited samples attracted great attention from many potential customers and experts in the field.

Menatek has utilised its expertise and previous experience to develop its torsion bar production capability. With non-stop innovation as a core value, Menatek made vital investments on the design and in-house testing of torsion bars and delivered its first product at the end of 2018.