A patient survives even in the roughest terrain – ProMIL 360 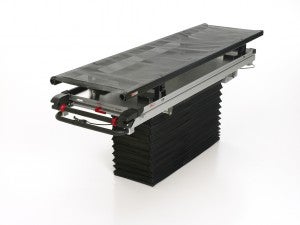 The strain caused by accelerations to the patient in a moving vehicle can be hard to bear even in wheeled civilian ambulances, not to mention in tracked military vehicles driving fast off-road. Acceleration forces inside ground vehicles are significant. This makes one wonder, if it is at all possible for a patient to survive the transportation. Reduction of this strain is the one of the most important aspect to consider when increasing patient survivability during off-road driving. The latest vehicles are equipped with active suspension which also reduces the forces directed to the patient. In an ambulance, further damping can be achieved by using stretcher platforms with suspension.

For a long time patient comfortability has been considered in civilian ambulances, but not until recently has it been an issue in military vehicles. Having this in mind Frestems developed a new treatment base. ProMIL 360 is a new state of the art hydraulic treatment base with suspension. The product is designed to be used in rough terrain conditions in tracked and wheeled vehicles. The system provides shock absorption and vertical stabilization for the stretcher patient with duplex hydro pneumatic suspension.

"Duplex means that the product does not only offer suspension in up down direction but also in back and forth. Hydro pneumatic suspension offers the same level of comfortability usually found in premium cars," says Markus Hietaranta, the head designer at Frestems.

The movement between different treatment positions operates with simple push of a controller button. It enables prompt and easy height, shock and anti-shock position adjustment. By default, the system is equipped with ProMIL 100 stretcher platform that provides additional extended loading and sideways sliding capabilities. It is also available with new ProMIL 150 stretcher platform with lower loading height.

Frestems has sponsored a special report on next generation stretcher systems for military ambulances and medical evacuation vehicles.