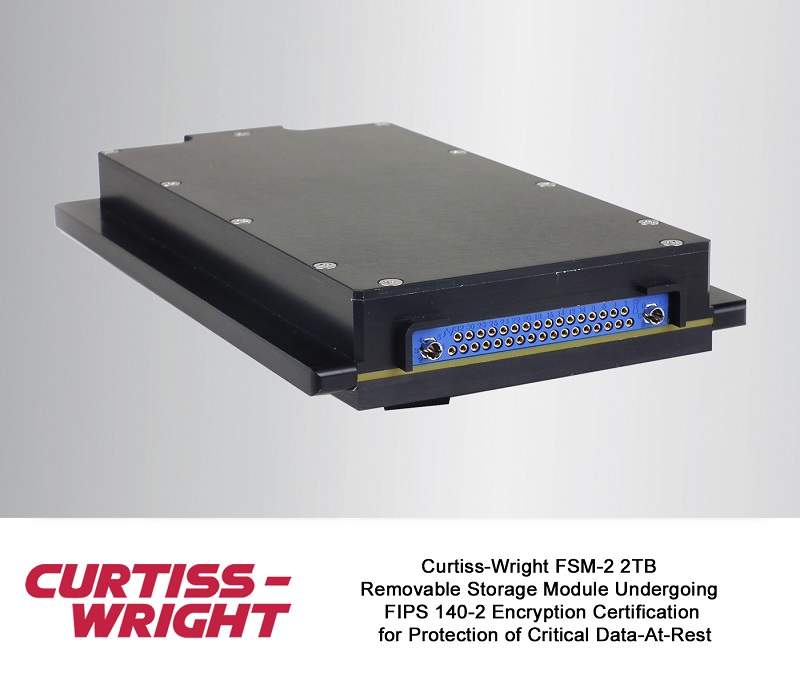 The module is currently under evaluation by the National Institute of Standards and Technology (NIST). The size, weight, power and cost (SWaP-C) optimised module enables the secure transport of sensitive data between a base station and deployed airborne, ground or naval platform. The FSM-2 provides direct-attached SATA storage independent of software driver, operating system, or processor type.

The compact 1.0in pitch 3U module features industrial temperature MLC NAND Flash and is designed to meet the demands of the most rugged, deployed applications. The module can be easily embedded into mission computers, sensor processors, mission recorders, instrumentation recorders, and network file servers such as Curtiss-Wright’s Compact Network Storage 2-Slot with Fibre Channel (CNS2-FC). Use of the FSM-2 can lower schedule and technical risk for deployed storage applications, providing a COTS storage solution that meets the rigorous scrutiny of FIPS 140-2 certification. Validation is expected to be completed in the second half of 2018.

About FIPS 140-2 Encryption on the FSM-2 Module

This flexibility allows system designers to respond to changing programme security requirements. Both internally generated and externally provided keys can be saved in two types of non-volatile memory or can be ‘not saved’ in volatile memory. Some applications require the keys to be automatically deleted upon every power loss as a security measure (for example, more secure transport). In those applications, volatile memory storage is the proper choice.

Externally provided keys can be restored to volatile memory, unlike the internally generated keys. To secure data by sanitization, a zeroize signal is accepted by the FSM. The zeroize signal is generated either by a software command, by pressing the push button on the FSM-2’s front panel, or via a discrete input. After the keys are zeroized (deleted), the data cannot be accessed. In addition to a front panel LED indicator, key status is also provided via a user control interface. The non-volatile SRAM is a special non-imprinting type while the non-volatile EPROM is cleared with a special algorithm.

As part of FIPS Level 3 requirements, anti-tamper on the FSM-2 involves placement of special seals that would be visibly damaged if the module were opened. Additional anti-tamper features are built into the FSM-2 electronics.

Wind River, a leader in delivering software for the intelligent edge, is collaborating with Curtiss-Wright Defense...