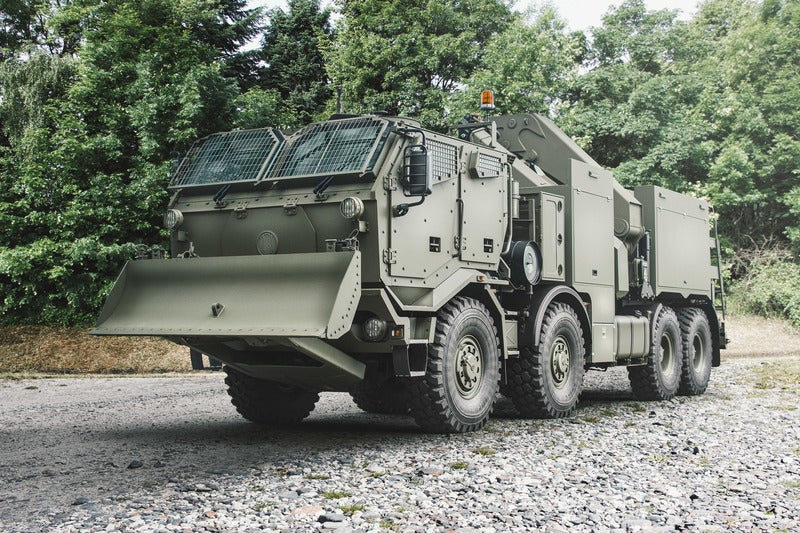 Thousands of TATRA vehicles with payload capacities between 10t to 33t and with 4×4, 6×6, 8×8, 10×10 and 12×12 drive systems serve in peace-keeping missions and combat operations around the world with durability, reliability and mobility.

TATRA trucks are mostly used as cargo and troop carriers, as well as carriers of special superstructures for munitions, military electronics, radar systems and other sensitive materials and equipment. Trucks from the product line 815-7 can be transported by C-130 Hercules.

Thanks to TATRA’s cab design, these vehicles can be easily armoured under cost-efficient and user-friendly conditions. TATRA TRUCKS is going to introduce a higher level of armouring of their cabs. The very first logistic all-wheel-drive vehicle, configuration 4×4, with armoured cab Level 2 – 3a/3b, optionally Level 3 – 3a/3b, the STANAG 4569, was introduced at EUROSATORY 2014.

The armoured cabin has been designed from the ground-up, with an integrated blast management system and multi-layered scalable armour system. By placing the users at the centre of the development process and creating the protection system around them, the cabin offers very high levels of protection at low weight without compromising on comfort or usability. The new cab is equipped by power-assisted door opening and energy-absorbing blast seats.

Support system for the crew

Thanks to supporting systems, such as central tire inflating system (CTIS), TATRA wheels equipped with tactical tires 16.00R20 with beadlocks and run flats, with the possibility to change the clearance on the fly, maximum speed 115km/h and gradeability 100% at 19,000kg gross vehicle weight (GVW), the vehicle is prepared for logistic missions in exposed areas. The new armoured cabin can also accommodate further configurations, from 6×6 up to 12×12.

Since 1850, TATRA has been supplying the transportation solutions all around the Europe and based on this experience, leading militaries and humanitarian services worldwide has been supplied with TATRA vehicles that meet their stringent requirements. TATRA’s core production programme includes heavy-duty, off-road trucks and vehicles for combined off-road and on-road transport.

With its new ownership structure and management appointed in 2013, TATRA TRUCKS has worked to continuously increase its production of military, firefighting and commercial vehicles and upgrading its level of aftersales services.