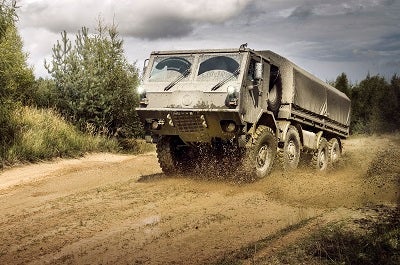 The TATRA FORCE series stands out with its unprecedented terrain manoeuvrability, including fording up to 1.5m, reliability, ability to drive in both extremely low and high outside temperature, easy operation and long service cycle.

The new vehicle series could therefore mean a certain evolution step in terms of TATRA all-wheel-drive vehicles currently operated in India, ranging from 4×4 up to 12×12 versions.

Between 2003 and 2012, 3,925 assembly kits were delivered to India, where they were completed and coupled with different superstructures according to needs and requirements of Indian Armed Forces.

Because of the problems associated with unlawful acts of former major Indian stakeholder of TATRA, R. Rishi, all deliveries from the Czech Republic to India were stopped.

A major breakthrough in the TATRA’s return to Indian market occurred after the change of ownership structure of the TATRA company in 2013 when it has been bought by Czech shareholders. Additionally, in February 2015, TATRA TRUCKS representatives signed a memorandum with Indian state enterprise BEML, which, on behalf of Indian Armed Forces, carries out final completion of the vehicles delivered in the form kits for assembly, CKD sets.

Last year, TATRA TRUCKS under the new ownership and new management delivered 100 vehicles to India, mostly in the form of complete knocked down (CKD) sets.

Also, TATRA TRUCKS subsidiary TATRA India has been established in order to develop after-sales services in the region.

Because of the customer’s satisfaction, proved top-quality of TATRA vehicles and last but not least, exceptional properties and universality of use of their vehicles in demanding Indian conditions, TATRA TRUCKS’ plan for 2016 is to deliver at least 250 vehicles in different states of readiness for the final assembly.