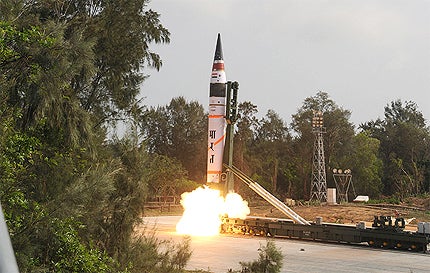 Agni-V is a long-range ballistic missile (LRBM) being developed indigenously by the Defence Research and Development Organisation (DRDO) of India. It is the first long-range intercontinental ballistic missile of India and is said to be capable of carrying a nuclear warhead. The missile has a range of 5,000km.

Agni-V was successfully test-fired from a test range at Wheeler Island, off the coast of Orissa in eastern India, in April 2012. It was launched from Launch Complex 4 of the Integrated Test Range (ITR) using a rail mobile launcher.

With the successful launch of Agni-V, India has joined the elite club of nations such as the US, Russia, China, France and the UK, which possess LRBM capability. Though the official range of the missile is 5,000km, China has claimed that the Indian missile has a range of 8,000km.

Agni-V was also successfully test fired from Wheeler Island in December 2016. It is expected to enter service with the Indian Army by 2017-18. Agni-V belongs to the Agni (meaning ‘fire’ in Hindi) class of missiles.

“With the successful launch of Agni-V, India has joined the elite club of nations such as the US, Russia, China, France and the UK, which possess LRBM capability.”

Development of Agni-V LRBM began in 2008. Although developed as an extension to the Agni-III intermediate-range ballistic missile, Agni-V is an entirely new design developed using inputs from Agni-III.

Agni-V is a three-stage solid-propellant missile. The first stage was adapted from Agni-III. Two stages of this missile were made of composite material. About 60% of the sub-systems used in Agni-V are similar to those of Agni-III.

The three solid-propellant composite rocket motor stages of the missile were independently tested by mid-2011. During the first launch, Agni-V’s flight time lasted 20 minutes and the third stage fired the re-entry vehicle. The re-entry vehicle hit the pre-designated target located more than 5,000km away from the launch site. The ships deployed at mid-range and target point tracked the missile’s trajectory.

The second test of the missile was carried out from Wheeler Island in September 2013, while the third test was successfully conducted from the same test range in January 2015.

The intercontinental missile has a length of 17.5m, a diameter of two metres and a launch weight of 50t. It can carry a payload of more than 1,000kg and has a range of 5,000km, which can be further increased by reducing the payload.

“Agni-V is a canister-launched, road-mobile missile similar to the Dongfeng-31A of China.”

Each warhead can be assigned to engage different targets located hundreds of kilometres away from each other.

Two or more warheads can also be assigned to a single target for better strike impact.

MIRVs provide a second strike capability against hard targets. MIRV warheads are also equipped with electronic equipment for jamming hostile radars. The interception of multiple warheads is much harder than killing a single warhead.

Propulsion of the Agni-V LRBM

Agni-V is powered by three solid fuelled engines. It uses a composite case solid rocket motor for the third stage. The first stage engine propels the missile up to 40km in height, while the second and third stages lever it to 150km and 300km high respectively. The missile finally reaches 800km and re-enters the Earth’s atmosphere to fly towards the target.

Agni-V is a canister-launched, road-mobile missile similar to the Dongfeng-31A of China. The launch platform is the 8 x 8 Tatra transporter erector launcher (TELAR) rail mobile launcher.

The canister is made of maraging steel and provides a completely airtight atmosphere to preserve the missile for years. The canister is designed to withstand 300t to 400t of thrust generated at the time of missile launch.