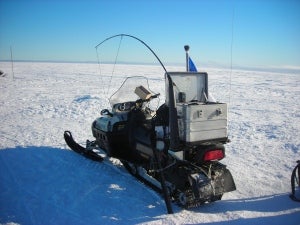 Every year a combined training mission between the Chilean and Argentinean Armies is conducted over the north-eastern section of the Antarctic Peninsula. In September 2011, a group of six participants from the Chilean base O’Higgins and five of the Argentinean base Esperanza, faced 100km/hr winds and temperatures of -24°C in a 280km "rescue" of two scientists who had fallen into a crevasse.

Skytel Telecomunicaciones managing director Mr Jose San Martin said, "The training mission is part of the Antarctic Treaty, and this exercise prepares the Chilean and Argentinean military ready to act in the case of a real accident and when the weather prevents an air rescue. We understand the equipment performed well during the mission and further discussions have progressed since the mission."

Between the months of November and May each year the military personnel of the O’Higgins base support 16 scientific projects. In September 2005, three military personnel died when their snowmobile fell into a crevasse 17km east of the O’Higgins base. A senior member of the 2011 expedition team explained, "On the Antarctic it is difficult to predict the weather and in minutes the conditions change suddenly. For example, when the blizzards start you can only advance with the assistance of a GPS because the white wind creates a complete whiteout. Our lead snowmobiles have special radar to alert us of the presence of crevasses covered by snow and we have satellite images to further support these missions."