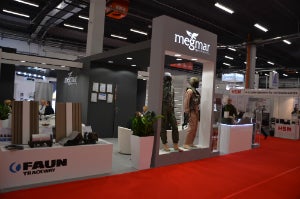 Team Trackway has been promoting its latest range of roadway and aviation solutions at the 22 MSPO exhibiton in Kielce, Poland.

MSPO is the largest exhibition in Europe for defence companies to showcase land, air, and sea capabilities in one place. The event was held from 1-4 September, 2014.

Lukasz Wlodarski, the firm’s representative, was visited at the stand by notable delegations worldwide, including Beata Oczkowicz, Undersecretary of State of the Polish Ministry of National Defence.

The team demonstrated how FAUN Trackway’s products can be used to facilitate both military and disaster relief scenarios. They gave a particular focus to the heavy ground mobility system (HGMS) demonstration unit ‘Rhiannon’.

The HGMS is made up of military load classification (MLC) 70. This is ground-surfacing aluminum matting mounted on to a hydraulic spool. The system is fitted to the chassis of a vehicle and powered by its engine, meaning minimal manpower is needed for its deployment.
Trackway is designed for speed; 50m of it can be laid by two men in just six minutes to aid mobility in challenging terrains including snow, sand, desert, and marshland.

HGMS has been supplied to more than 35 armed forces worldwide, with recent orders coming from the Danish Defence Acquisition and Logistics Organisation (DALO), as well as the Irish Armed Forces.

Another product of particular interest to attendees was the helicopter landing mat (HLM), which was developed for the UK Royal Engineers.

HLMs are available in a variety of sizes to provide a solid foundation for helicopter landing and forward operations.

The Polish Air Force were so impressed, they invited the team to present at their conference, which took place the week after the exhibition.