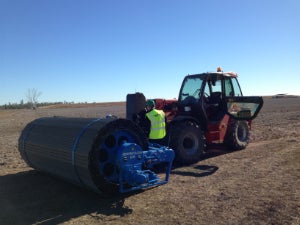 Team Trackway has been showcasing one of its latest products in Australia.

More than 50 mining personnel attended the showcase, including prominent pipeline contractors from around Queensland, as well as engineers from Arrow Energy, a leading coal seam gas provider to the territory.

The MGMS-BD LITE was used to demonstrate how the laying and recovery of Trackway can take place over even the softest of soils in this key mining area. A 42t semi-trailer was towed over the Trackway to show its durability even in the toughest conditions.

The presentation was held at Thetan Farm, Queensland, on the agricultural lands of the Sarat Basin, about a two and a half hour drive from Brisbane. This area is known for its very rich but difficult land and notorious for its unusual mud consistency during the ‘wet season’, which runs from November to April.

Once wet, the soil becomes fluid to a depth of around 1m, creating a thick mud that clings to all surfaces, making traversing the terrain extremely difficult.

Mining in particular, is problematic; low impact mining methods are currently used to reach the vast amounts of coal seam gas lying beneath the Basin.

FAUN’s MGMS-BD LITE was designed to counter the challenge of vehicles traversing difficult terrain and was first developed in 2012 following extensive consultations with the Danish Armed Forces.

The system can be fitted to a wide range of front-end loader vehicles to facilitate the rapid deployment and collection of Trackway with only two trained individuals required.

FAUN was represented by its Australian agents, Rohan James and Anthony Stygall of Forward Defence.