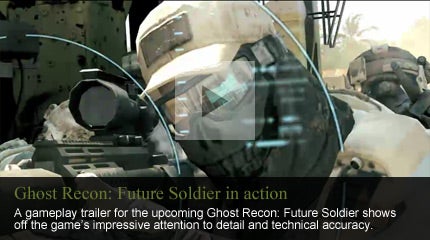 As the high-definition era of gaming continues to mature, the concept of ‘immersion’ has risen to become one of the key words in the game developer’s lexicon.

Powerful modern consoles and increasingly high-tech televisions mean that, from a purely audiovisual perspective, today’s games have more power to immerse players in new worlds than ever before.

The latest graphics engines give game developers the ability to realistically recreate real-life scenarios or invent entirely fantastical ones.

While gamers might choose to battle bizarre alien species on distant worlds or live out their superhero fantasies, many opt for an experience much closer to what they might regularly see on news reports and documentaries – the modern military shooter.

"For Ghost Recon: Future Soldier, a full four-man team of former US Navy SEALs was used in the motion-capture process."

Over the course of the latest generation of games consoles, now considered to be approaching their dotage as even more powerful hardware prepares to hit store shelves, military shooters have become one of the pre-eminent forces in video games.

Call of Duty: Modern Warfare 3, the latest iteration of the Call of Duty franchise (the undisputed heavyweight of the genre), sold around 6.5 million copies in the US and UK in its first 24 hours on sale when it was released in 2011, grossing $400 million in the blink of an eye to become the most successful entertainment release of all time.

Steadily gaining in popularity over the last ten years, these games, in which players step into the combat boots of a modern soldier and complete objectives in realistic virtual battlefields, take their inspiration from real-life military technologies and tactics.

They range from accessible fare like Call of Duty, which finds its closest counterpart in the wham-bam simplicity of Hollywood action films, to highly complex tactical combat simulations that pay close attention to military accuracy and authenticity.

The developers of the more tactical war games go to extraordinary lengths to ensure that, as far as possible, their products are an accurate reflection of the cutting-edge technology and tactics which are being used on today’s battlefields. It’s an attention to detail that fans have come to expect, but how can development teams with little to no military experience create games that are at once immersive and entertaining, authentic and accessible?

A huge amount of research is invested into the world’s most respected tactical military games, from vehicle and equipment designs to consulting with defence manufacturers and military advisors. Bohemia Interactive, an independent game studio based in the Czech Republic, takes great care to ensure authenticity in its Arma series, reckoned by many to be the world’s most realistic military simulators.

Despite the financial restrictions inherent to independent game development, Bohemia spends the time and money required to make the military technologies in its games, from calling in artillery strikes and air support to piloting advanced military vehicles, ring true with a knowledgeable fanbase.

According to Ivan Buchta, creative director of Arma 3, the company’s latest game, due for release in summer 2012, this attention to detail is an absolute necessity.

"There is a hardcore milsim [military simulation] community around our games, consisting of many military professionals, military enthusiasts and other generally knowledgeable fans, who regard military accuracy and authenticity as very important," he said.

"Chances to see the exact vehicles are scarce and details on many weapon platforms are confidential, so we often have to work with an educated guess instead of exact information," explained Buchta.

"However, we always try to gather not just pictures or blueprints, but also videos or even stories. The live experience helps a lot."

For game creators like Ubisoft, a giant of the development and publishing world with studios around the world, options for ensuring military accuracy in franchises like Rainbow Six and Brothers in Arms are even more numerous.

"Games and simulations have a long history with militaries around the world for their potential as training tools."

No expense is spared to create a credible game world in one of the company’s flagship military series, Ghost Recon. For the upcoming Ghost Recon: Future Soldier, the latest game in the series, a full four-man team of former US Navy SEALs was used in the motion-capture process to give the game’s ‘Ghosts’ (a fictional US special forces unit) the look and movement of a real spec ops team.

As well as speaking to weapons manufacturers and military specialists, Future Soldier has a dedicated authenticity co-ordinator on-board to ensure that the game’s 52 weapons and 48 weapon attachments (including thermal optics, under-barrel grenade launchers and silencers, all of which can be experimented with in the game’s weapon customisation mode, Gunsmith) are accurate and not out of place, as the game’s associate producer Yann Suquet explained.

"I remember when we were working on the game, a machine gun model for the terrorists wasn’t ready to be implemented into the game yet, so we replaced it with an American minigun so we’d be able to play the map," Suquet said.

"I remember receiving e-mails from [the authenticity co-ordinator], saying ‘Hey, this is not possible – those terrorists would not have an American weapon.’ We were like, ‘We know, we’re going to change it!’ So it goes into incredible detail."

Ubisoft’s IP director Adrian Lacey agreed, noting that authenticity is important not only for fans, but as a mark of deference to the real-life military operators that provide the inspiration for games like Future Soldier.

"You have to be authentic today – it’s that credible universe that you’re buying into," he said. "Particularly when you’re talking about a realistic shooter, you have to show that respect to the military. These guys are professional soldiers, it’s very important that they feel it rings true."

In the end, however, it’s important to note that these games are being made for gamers, not soldiers, and providing thrilling entertainment is the paramount concern. Buchta notes that making Arma 3 too realistic runs the risk of alienating players who find it too constrained or frustrating.

"There are technologies which work great for our game’s scope, and some which don’t," he said. "Extensive use of unmanned vehicles works well and provides the player with some interesting means to scout the enemy. On the other hand, there is no sense for us to simulate something like complex radio jamming or encryption, as it wouldn’t provide any real gameplay benefits."

Lacey believes there’s a delicate balance to be struck between accuracy and entertainment, that players should be enabled to feel that they have the skills of an elite soldier without the years of training. For Future Soldier’s creative director Jean-Marc Geffroy, however, the restrictions of authenticity also have some interesting implications for game design.

"The beauty of it is, when you follow the route of authenticity and truth, you find new gameplay ideas," Geffroy enthused.

"You just have to know how the guys who handle weapons operate, distance of fire and so on, then you can say, ‘Hey, we can renew the gameplay if we just change this or that.’ It’s not just a responsibility, it’s a source of inspiration as well. It allows us to not to go in the wrong direction, because if something is impossible we just have to go back. Often, the reality is more exciting than the fiction!"

Future Soldier, as its name suggests, is set in the battlegrounds of the near future. As such Ubisoft has been able to speculatively accelerate the deployment of in-development technologies like active camouflage, helmet-mounted optics and pocket-sized deployable reconnaissance drones to give players new gameplay experiences. Nevertheless, the team is always wary of straying into science fiction, keeping its gadgets grounded in some sense of reality.

"We take the foundation of science and expand it and speed up the process a little bit," said Lacey. "But whether it’s the advanced warfighter systems or the future combat systems, [the US military] is already talking about these things. Yes, they’re not integrated into your mass military on the battlefield now, but they do exist.

"When we first did the cross-com [heads-up display], people were saying, ‘No way, that’s never going to work!’ But the cross-com was already on most of their helmets on the battlefield because of the increased situational awareness. We actually resist showing certain things in terms of technology, because people just don’t believe it."

"A huge amount of research is invested into the world’s most respected tactical military games."

It’s clear that military technology has plenty to offer the world of videogames in terms of inspiration, but what about the other side of the coin?

Games and simulations have a long history with militaries around the world for their potential as training tools. After all, the origin of 2004 squad-based tactical shooter Full Spectrum Warrior can be traced to a development programme within the US Army-funded Institute for Creative Technologies to explore the potential of gaming as a training aid, before a separate commercial release was created for gamers.

Indeed, Bohemia has developed a military training software package of its own, using the graphics engine from the Arma series. Virtual Battlespace 2 (VBS2) is in use by the US Army, US Marine Corps, the Australian Defence Force and The British Army "for training or mission rehearsal", explained Buchta.

"Militaries have been using computer games or their derivatives for some time already, and soldiers appreciate the importance of such training tools. Computer games allow soldiers to train certain skills or procedures faster and cheaper."

So games and the military enjoy a two-way technology transfer. Games like Ghost Recon get informed by the latest military innovations and weapons platforms, while armed forces around the world employ sophisticated software to help ready their troops for real combat. From the games development perspective, as long as the demand for realistic military shooters maintains its pace and the world’s armed forces keep prototyping new technologies, it seems fact will continue to be as powerful a source of inspiration as fiction.

Browse our products and services listings for company and product information, white papers, videos, news and contact details from suppliers in the training and simulation field.