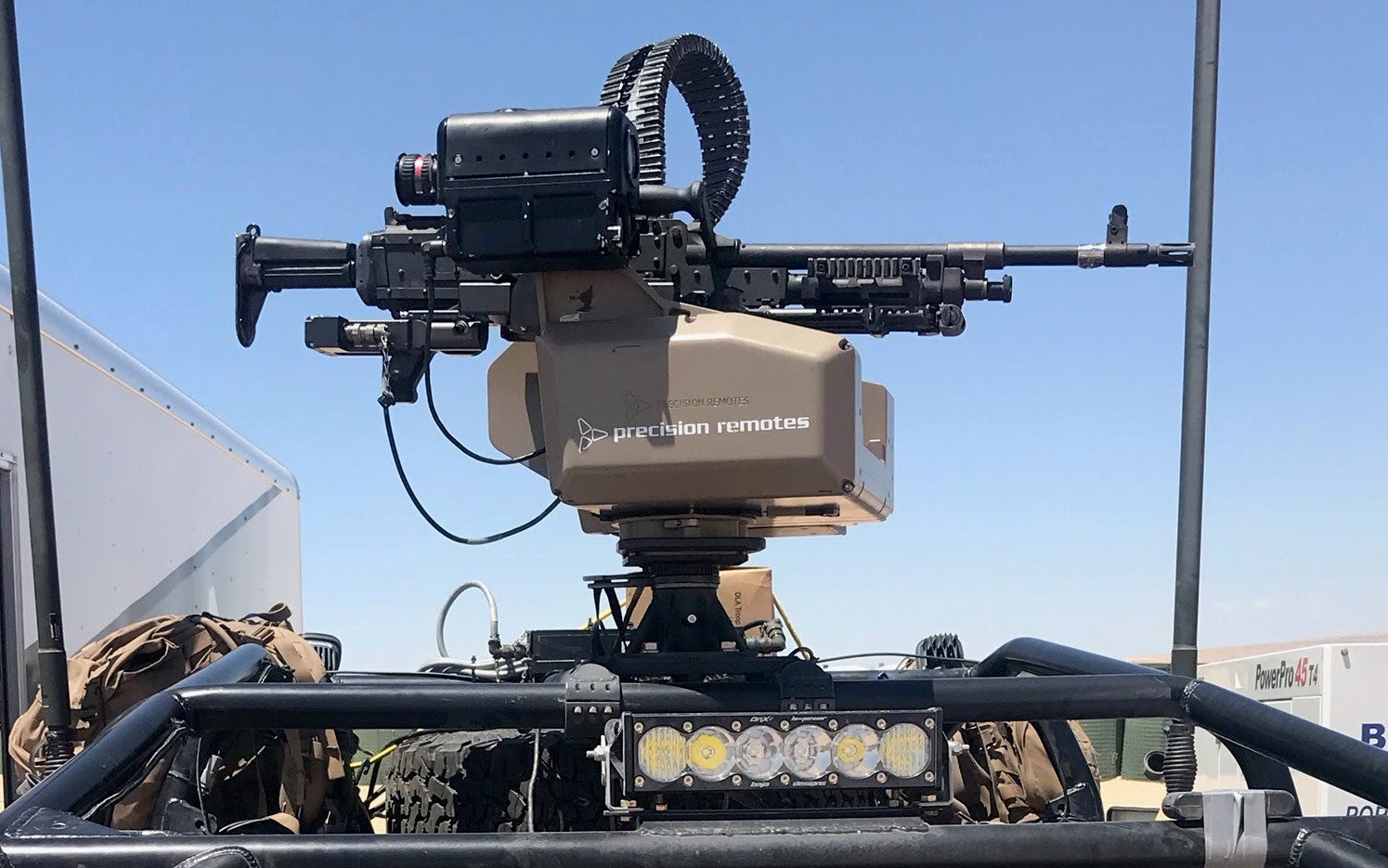 The T360 system is a lightweight remote operated weapon system (ROWS) which can be used on fixed site, vehicle-mounted, or drop-deployable applications. Its light weight (less than ~80lbs, without weapon or ammunition) means it is easily removable and transportable in the field, allowing for flexibility in varying applications or ease of servicing and logistics.

The T360 is also unique in that it uses standard, unaltered weapons, allowing the weapon to be dismounted and used manually if needed. Its low mass also provides for a much lower power draw than competing remote weapon stations, making it well suited for robotic vehicle applications, where low size, weight and power are crucial considerations.

Precision Remotes has been developing and manufacturing Lightweight Remote Weapon Stations (LRWS) and surveillance platforms since 1998 and is capable of delivering unparalleled firepower for small class vehicles, UTVs, and UGVs used in a wide range of military applications.

Precision Remotes has been actively designing and manufacturing RWS for over 20 years and the tele-present Rapid Aiming Platform (TRAP) T-2 was the first prototype to successfully demonstrate the RWS concept with the IDF, which then evolved into the T-250 for vehicle-mounted and facility active denial systems.

The base platform of the TRAP T-360 A3 contains the electromechanical systems, as well as the ballistic computer, stabilisation equipment, and the slip ring. The housing of the operating system is unique and sets the T-360 apart from other systems.

The ‘Weapon Sensor’ package fixes on to the outside of the platform and is co-axial with the weapon. The weapon mount and weapon actuators fix on top, and the ammo can and feed chute fits on the side. The system mounts to any Nato 2.5′ pintle mount, Mk 16 Naval mount, or Delta tripod. The system is run by a hand controller attached by cable or wirelessly, or can be merged into larger command and control systems.

The T-360’s lightweight design makes installation and re-location easy, making it the ideal solution for military missions. For vehicle or tactical configurations, the system can be controlled by a single operator using the hand controller. This provides a display of the azimuth and elevation, target range, reticle, thermal, and day camera view with zoom.

For operation, the operator turns the system on and then selects weapon safe, or fire options, semi-auto, three-round burst, or full auto. After the safety is released, the controlled holds down dual fire triggers to engage the target, with the first shot accuracy measured at 98%. Testing has shown accuracy of 91% of shots fired on target at 800m. Having this degree of control while stationary or moving is a massive advantage to the warfighter against in combat conditions.

Precision Remotes can provide contractual training to defence forces for the T-360. The full system training can be accomplished in 1-2 days. The system is designed to require minimum maintenance and should be sent back to the factory for repair if operational problems occur.

Weapon maintenance should be scheduled following the manufacturer’s suggested guidelines.

Core applications for the T-360

The T-360 has been specially designed to mount on any water, air, or ground vehicle, with a Nato 2.5′ or MK 16 weapons install and power supply. T-360 allows the user to move the RWS to different types of vehicles efficiently and to replace it in case of combat damage quickly.