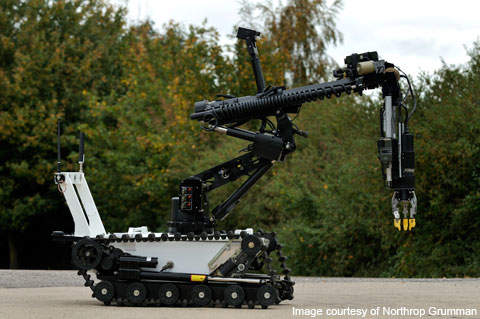 Northrop Grumman upgraded its Remotec Coventry facility for developing UGVs such as Wheelbarrow and CUTLASS. 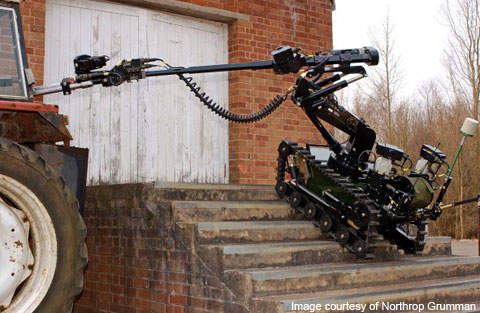 The Wheelbarrow Mk9 can cross any terrain and climb stairways of 450 to reconnoitre suspect devices.

In April 2010, Northrop Grumman unveiled the Wheelbarrow Mk9, a new version of its Wheelbarrow unmanned ground vehicle (UGV). The enhanced UGV is designed for surveillance and the remote handling of hazardous threats.

The Mk9’s enhancements have increased its speed, mobility, payload handling capacity and reach capabilities. It is also installed with the latest camera specifications and advanced control and communication systems to help it detect and dispose improvised explosive devices and combat threats. The new features are expected to increase its capabilities in defence and civilian security applications.

Northrop Grumman, through its subsidiary Remotec, is the sole supplier of the Wheelbarrow to the UK Ministry of Defence.

The Wheelbarrow was developed in the 1970s as part of the UK Government’s intent to deploy remote control vehicles in the battlefield. It has been used by bomb disposal squads in Northern Ireland and Iraq. The UGV’s development involved a consortium of companies, including Alvis Logistics, the predecessor of Remotec UK.

"The Mk9’s enhancements have increased its speed, mobility and payload handling capacity."

In 1992, a joint venture of Alvis and Racal Electronics was awarded a contract for designing and producing a fleet of Wheelbarrow Mk8s for deployment in the MoD’s Mid-life Improvement Programme. In 1993, Alvis acquired the Wheelbarrow business of Morfax, the only manufacturer of the UGV.

In October 2009, Northrop Grumman upgraded its Remotec Coventry facility in the UK to design, develop, manufacture and provide technical support to UGVs such as the Wheelbarrow and Cutlass. About 2,000 UGVs are operational in explosive ordnance disposal units in 52 countries across the world.

The Mk9 can remotely detonate IED and undertake several hazardous operations such as ground surveillance and chemical, biological, radiological and nuclear missions.

The uncluttered superstructure of the UGV has a wash-down capability with an improvised under-vehicle reach. The Mk9 has a modular telescopic arm with a maximum reach of about 6m. It can cross any terrain and climb stairways of 45° to reconnoitre suspect devices. The maximum speed of the Mk9 is 5km/hr. It has a unique design with a low profile three-fingered gripper. It can lift a payload of 150kg.

Other features of the Mk9 include its stance change facility, rocker bogie system to overcome obstacles and turret rotation up to +/- 215°. The EOD equipment has seven firing releases and an emergency arm self-righting feature. The vehicle has built-in diagnostics and a revised cable management system. The UGV also features an integral ceramic cutter and a two-speed gearbox.

The Mk9 is installed with a minimum of six cameras and provides real-time graphical vehicle representation. It also features advanced communication systems such as a digital radio for an extended operating range, real-time sensor feedback, enhanced picture quality and digital video and data recording. It has a fibre optic auto-rewind system and a two-way audio system, GPS and continuous rotate search pan, tilt and zoom camera. It can operate for up to four hours.

The vehicle has an enhanced user-friendly touchscreen portable command console with options for wireless local control, through hand controller or a joystick controller. It has a separate data channel for additional sensor integration and enhanced functionality, including preset positions.