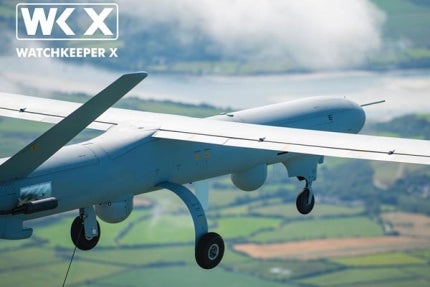 The UAS is intended to accurate and persistent intelligence, surveillance, target acquisition and reconnaissance (ISTAR).

Thales and WB Electronics partnered in July 2015 to develop the armed version of the Watchkeeper X UAS for the Polish Armed Forces’ Gryf programme. The armed aircraft system was unveiled at the MSPO international defence industry exhibition in September 2015.

The Watchkeeper X UAS is based on the Watchkeeper (WK450) UAS, a derivative of Elbit Systems’ Hermes 450 unmanned aerial vehicle developed by Thales for the UK Army.

The UAS is built to CS23 / STANAG 4671 airworthiness certification standards. It operates as a multi-mission airborne surveillance system and can be integrated with a wide variety of interchangeable sensors based on the mission needs.

It can be transported by a variety of vehicle types and can be rapidly deployed by air, land or sea-based platforms and featuresautomatic take-off and landing systems (ATOLS).

A fully autonomous mission control system provides independent control of all aspects, including decision-making and target detection during the flight. The drone is also installed with an on-board power management system.

The unmanned aircraft is equipped with a standard 15in gimbaled payload camera for capturing intelligence, surveillance and reconnaissance data during daytime and a night camera for operations in low or zero-visibility conditions. It can also be fitted with a high-definition camera, and ground and maritime surveillance radars for the detection of targets on land and over water respectively.

The encryption, in-flight analysis and post-flight analysis devices allow the operator to extract intelligence data from the captured information. A STANAG C4I standard interface enables sharing of vital information between the UAS operators and other operating parties connected in the same network.

“The armed aircraft system was unveiled at the MSPO international defence industry exhibition in September 2015.”

The captured data will be transmitted to the ground control station through the data links in real-time. The UAS uses remote terminals for the transmission of telemetry data to a master control system.

The Watchkeeper X can be weaponised with Thales’ Free Fall Light Multirole Missile (FF LLM) precision-guided glide munitions to engage both fixed and moving targets in tactical ISTAR missions. It can also be equipped with STANAG standard weapons control systems.

The unmanned air vehicle and its payloads are controlled by operators from a standard ground control station. The drone can be operated by a ship-board control station when deployed in maritime missions.

The unmanned air vehicle can fly at a maximum transit speed of 95k, and has an operating range of 140km and endurance of more than 16h. Its robust design permits operation in hostile environments, difficult weather conditions and extreme temperatures.