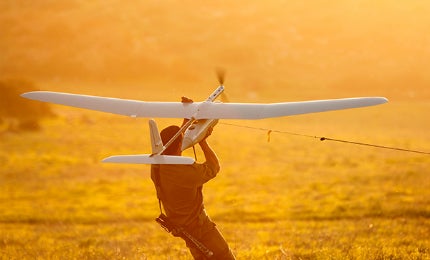 The system supports a variety of military applications such as organic beyond-the-next-hill reconnaissance, covert aerial intelligence, force protection and counter insurgency. It can also be used by homeland security authorities for surveillance of coastal areas and borders, anti-terror operations, perimeter security and law enforcement missions.

"The UAS can be deployed from static or moving ground vehicles, and can fly autonomously from take-off to landing."

Skylark I-LEX UAS is packable and simple to operate. It can be managed by two operators through a mission-oriented, intuitive man-machine interface (MMI). It features an airworthy design and incorporates enhanced safety equipment.

The UAS can be deployed from static or moving ground vehicles, and can fly autonomously from take-off to landing. It can also operate in fly-by-camera mode for automatic tracking and detection of stationary and moving targets.

The drone has a wingspan of 3m, take-off weight of 7.5kg and payload carrying capacity of up to 1.2kg. Its hot-swap capability allows users to interchange different payloads based on their operational needs.

In addition, it features air data relay communication capability and can be integrated with the user’s C4I systems. An airborne airbag system of the UAS enables point recovery without any ground reception devices.

Payload details of the mini UAS

The Skylark I-LEX unmanned aircraft system is integrated with a gimbaled and stabilised payload sensor for collecting high-quality imagery and video in real-time during the day and at night. It is also equipped with image processing capabilities, including geo-registration, automatic tracker, moving target indicator and mosaicking.

An advanced digital encrypted data link is used to downlink real-time video, telemetry and data for processing by the ground control station (GCS).

The UAS is designed to deliver high performance capabilities for military homeland security and civil applications, and can be deployed to conduct a variety of missions.

Powered by an electric propulsion unit, the Skylark I-LEX UAV can transmit information within a line-of-sight communication range of 40km. It has a service ceiling of 4,572m and is inaudible at 100m above ground level. The UAS can endure for up to three hours. It delivers improved performance compared to the Skylark I-LE.

The Skylark family of unmanned systems include Skylark I, Skylark II, Skylark I-LE, and Skylark Block 2, a US version of the Skylark 1-LE. Variants are operational with the IDF and a number of NATO countries, as well as other international military and security authorities.