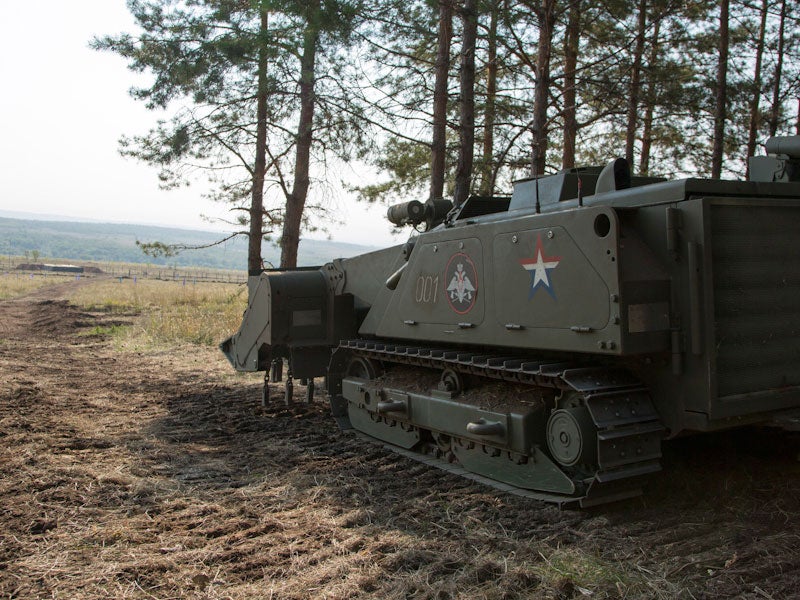 Uran-6 is a multi-functional, mine-clearing robotic system manufactured by JSC 766 UPTK for the Armed Forces of the Russian Federation.

The demining robot can be deployed in mine reconnaissance and area clearance operations to detect and remove explosive ordnance and anti-personnel / anti-tank mines. It also minimises risks caused by unexploded ordnance and other dangerous objects.

The engineering units of the Southern Military District of the Russian Federation conducted mine-clearing tests on the Uran-6 robots in the remote areas of Chechen Republic in June 2014. The machine destroyed approximately 20kg of explosive devices during the tests.

The Uran-6 unmanned demining systems were deployed by the Russian troops for the removal of explosive devices in Palmyra, Syria, in April 2016.

The machine also took part in the mine-clearing operations performed by the combat engineers unit of the Southern Military District in Chechnya and Ingushetia in April 2016.

In May 2016, Russian state intermediary agency JSC Rosoboronexport began preparations to export the Uran-6 mine-clearance machine to the international market.

The Uran-6 demining robotic system consists of a small, lightweight demining robot, remote control unit and payloads. It is transportable by road, sea or air.

Four video cameras, fitted atop the robot, provide operator with 360° field-of-view of the operating area in the front and rear. The real-time imagery is transmitted to its remote control system.

The Uran-6 robot can be equipped with a number of operating tools including five different mine sweeping devices to detect and detonate land mines.

The tiller is mounted at the front and rotates using milling chisels to destroy mines. The shovel and forklift tools mounted in the rear are used for lifting and moving the objects.

The mine-clearing robot is controlled by a single operator using a remote control system from a safe distance of 1km.

“The demining robot can be deployed in mine reconnaissance and area clearance operations to detect and remove explosive ordnance and anti-personnel / anti-tank mines.”

The machine operator remotely selects the effective disposal device based on the type of the object determined by the robot.

The Uran-6 military robot is designed to operate in dangerous combat situations, keeping soldiers out of harm’s way. It is survivable to mine explosions of 60kg of TNT and can clear anti-personnel mines and hazardous substances weighing from 1kg to 4kg of TNT.

A 240hp diesel engine provides a mine-clearing speed of 2km/h and maximum speed of 5km/h. It offers a power to weight ratio of 32hp/t.

The Uran-6 mine-clearing robot is able to operate continuously for up to five hours. It can overcome 1.2m-high obstacles and cross 1.5m-wide trenches. The maximum climbing ability of the demining robot is 20°.

PIAP
PIAP is a Polish designer and producer of EOD/IEDD robots...
SUBSCRIBED