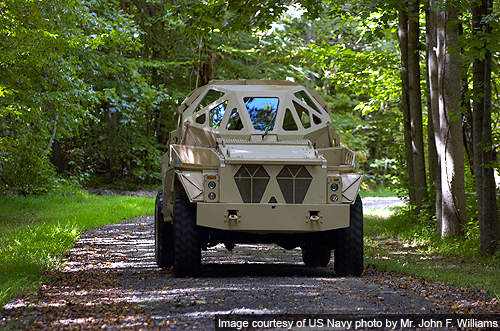 The Ultra armoured patrol vehicle development is a research project funded by the Office of Naval Research (ONR), at the Georgia Technology Research Institute. 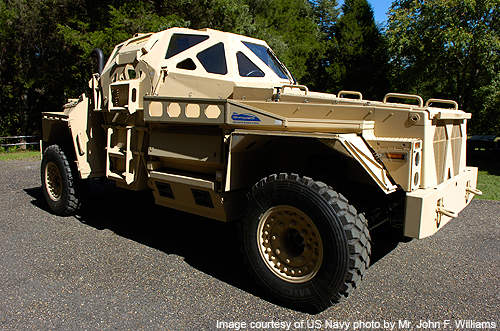 A side view of the Ultra armoured patrol vehicle. 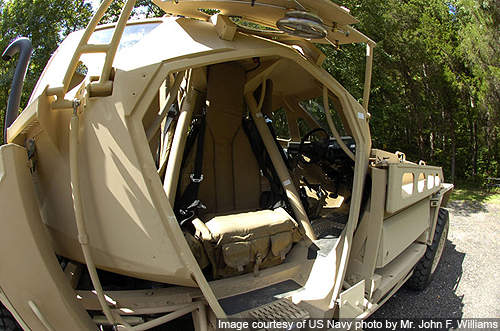 A close view of the internal layout of the Ultra armoured patrol vehicle. 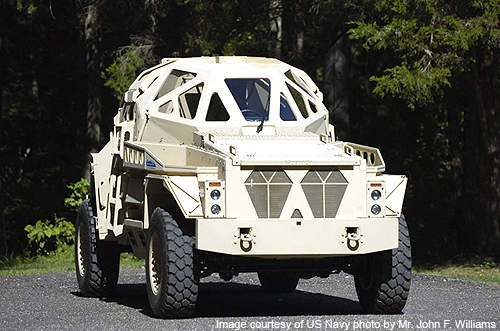 The Ultra AP is slightly larger than HMMWV.

The Ultra armoured patrol vehicle (APV), or Ultra AP, is a new concept combat vehicle developed by the Georgia Tech Research Institute (GTRI) in cooperation with the Office of Naval Research (ONR). The APV was displayed at the Modern Day Marine Expo held at the Marine Corps Air Facility in Quantico, Virginia, in September 2010.

The Ultra AP is based on the Ford F-350 truck platform. The design incorporates safety features and high manoeuvrability, as well as modern blast-deflection technology and materials.

The vehicle has a curb weight of 4,000kg. It features an egg-shaped crew capsule known as blast bucket. Designed to avoid blasts, the blast bucket also acts as a rollcage if the vehicle flips over. Seating for four troops is provided in a diamond arrangement providing a better view of all directions.

“The Ultra 3T is an advanced variant featuring a range of modern technologies.”

The Ultra armoured patrol vehicle development is a research project funded by the ONR and executed by the GTRI. The Ultra concept was unveiled as part of the US Army TARDEC COMBATT programme sponsored by the National Automotive Center.

The programme is intended to use commercial vehicle platforms to build more rugged military vehicles.

The first prototype was unveiled in September 2005. The vehicle was built using revolutionary designs to combine armour and chassis together to achieve increased survivability. In February 2010, the ONR transferred the ownership rights of the vehicle to the GTRI to continue the research efforts.

The crew compartment is designed to accommodate six personnel including a driver and commander, facing forward, and two pairs behind them facing outwards. This configuration will move the crew away from external walls to reduce harm from side blasts.

The vehicle is also fitted with a replaceable blast bucket that is bolted to the bottom of the vehicle.

“The Ultra AP was built based on the Ford F-350 truck platform.”

Made of welded steel armour, it acts as a crumple zone to absorb and deflect the energy from a blast. The blast wedge provides ballistic, blast and enhanced roll-over protection.

Additional armour can be added and easily reconfigured according to requirements. A blast test conducted at the Aberdeen Test Centre proved that the crew compartment could protect the crew from improvised explosive devices (IED).

The Ultra AP is powered by a 6l power stroke turbo diesel engine coupled to a five-speed automatic transmission. The engine delivers a power of 350hp.

The vehicle is equipped with onboard computers to integrate steering, suspension and brakes to deliver a high level of mobility and safety.

The Ultra 3T is an advanced variant featuring a range of modern technologies in a single automotive package. This variant will be equipped with computerised stability control systems and advanced power-generating capabilities in addition to the common technologies such as anti-lock brakes and automated systems.

GTRI plans to equip the variant with advanced ‘drive-by-wire’ technologies and a hybrid engine integrating the diesel and electric power plants.