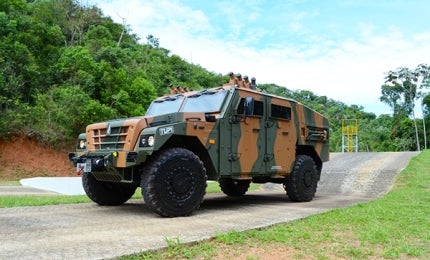 Avibras and Renault Trucks Defense jointly developed the TUPI 4×4 light armoured vehicle for the Brazilian Army. The vehicle is an ideal platform for tactical missions such as patrol, convoy escort, troop transport, command and control, surveillance and reconnaissance.

The wheeled vehicle is one of the two finalists selected by the Brazilian Army for its Wheeled Multirole Light Armoured Vehicle (VBMT-LR) programme in July 2015.

The VBMT-LR programme was initiated by the Brazilian Army to acquire Armoured Car Multitasking Take Wheels (VBMT-CO) under the Projecto Estratégico do Exército-Guarani (PEE Guarani). The VBMT-LR will include a new family of wheeled armoured vehicles to reconstitute and modernise the Brazilian Army’s capabilities.

"The wheeled vehicle is one of the two finalists selected by the Brazilian Army for its Wheeled Multirole Light Armoured Vehicle (VBMT-LR) programme in July 2015."

Avibras and Renault Trucks Defense joined forces to design and develop the TUPI 4×4 armoured vehicle in a short duration. The vehicle satisfied all the requirements set in the AAP and the basic operational requirements issued by the EB.

The TUPI 4×4 will be manufactured under licence by AVIBRAS at its new armoured plant in Jacarei. The indigenous content on the vehicle will be gradually increased with cooperation from Renault Trucks. The initial batch of vehicles will include 32% of domestic content, which will be raised to more than 60% by 2016.

The vehicle was demonstrated to the CAEx in April 2014. It successfully underwent all tests while carrying 40% higher payload than required.

The first batch of TUPI vehicles is anticipated to be acquired under an urgent operational requirement by the Brazilian Army Peace Keeping Forces. The vehicles will be deployed to support the United Nations Interim Force in Lebanon (UNIFIL).

The TUPI 4×4 vehicle is a derivative of the Sherpa Light Scout, which itself is one the versions in the Sherpa Light family of vehicles. The conventional layout houses engine in front, crew section in the middle and troops/cargo compartment at rear. The modular design allows for the installation of command and control systems, and other mission systems required for different versions.

The spacious and ergonomically designed cabin accommodates five seats and offers room for the installation of different mission equipment according to the customer-specific needs. The crew and troops enter and exit the vehicle through four doors located on either sides of the hull.

The modular roof design adapts a range of weapon systems such as a simple single mount for a small machine gun or different makes of remote weapon station, the Brazilian REMAX for 0.50 calibre/7.62mm machine gun, and automatic grenade launcher. The roof top is also mounted with eight smoke grenade launchers for increased survivability.

The basic hull can be integrated with additional armour shield to offer protection against small arms fire. The lightweight armoured configuration optimises the fuel consumption and protects vital components of the vehicle. The vehicle can be hinged with add-on armour kits and blast protection features for protecting the crew from ballistic, mine and improvised explosive device (IED) threats.

The TUPI vehicle is powered by a Renault MD-5 215hp diesel engine coupled to an automatic transmission. The sturdy power-plant and transmission provide high-mobility even with maximum payload.