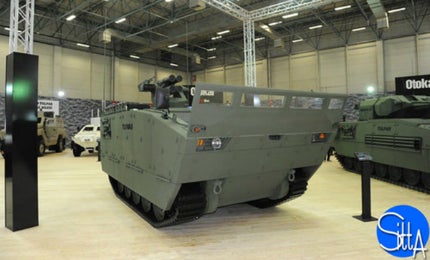 The Tulpar-S multi-purpose, tracked armoured combat vehicle was unveiled at the IDEF 2015 International Defence Industry Fair in Istanbul, Turkey, in May 2015.

It is an enhanced version of the Tulpar infantry fighting vehicle that was introduced in May 2013 for the Turkish Armed Forces.

The new-generation vehicle features amphibious characteristics and a high payload capability. It can be integrated with different mission systems to meet the future operational and mission needs of the land forces.

The tactical vehicle measures 5.7m long, 2m high and 2.9m wide, and has a combat weight of 15t. Its large internal volume creates comfortable seating for up to ten personnel including a driver, commander and a gunner.

The vehicle can be optionally installed with an auxiliary power unit and a heating system.

Smoke grenade launchers, mounted on both sides of the turret, provide self-protection for the troops.

The Tulpar-S vehicle’s protection features also include a life support and fire extinguishing system, as well as an automatic fire suppression and detonation system.

Observation and fire control of Tulpar-S

The Tulpar IFV is designed primarily to safely transport infantry to the battlefield.

The commander’s sighting system consists of eight-piece periscopes, whereas the driver is provided with three periscopes for enhanced situational awareness.

Rear-mounted daylight and thermal cameras provide increased observation and situational awareness of the battlefield during day and night.

The onboard command and control system and combat information systems provide tactical intelligence and fire-control data. A global positioning system enables operators to track the exact location of the vehicle.

The Tulpar-S armoured tactical vehicle is powered by a Cummins diesel motor, which has a generating capacity of more than 280kW. The engine is coupled to an Allison automatic transmission system that provides improved steering and control.

Suspension is provided by dampers and twisted shaft. The vehicle is installed with a 24V DC electrical system and maintenance-free batteries.

The tracked armoured vehicle offers a speed of more than 70km/h and a range of 500km. It has the ability to climb grades of 60% and side slopes of 40%, and can negotiate vertical obstacles of 0.75m and cross trenches of 1.9m.

The vehicle is also capable of operating on rugged terrains under varying climatic conditions.