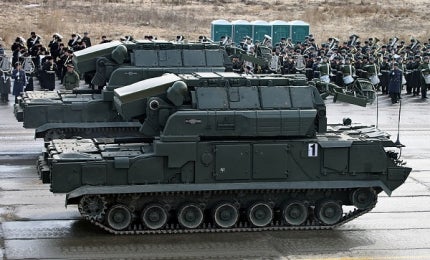 Tor-M2U short-range air defence missile system (ADMS) is a modernisation of the Tor-M2 missile system developed by JSC Izhevsk Electromechanical Plant Kupol, a part of Almaz-Antey. The ADMS is in service with three military districts of the Armed Forces of the Russian Federation and is set to replace Wasp air defence systems, as well as Osa short-range tactical surface-to-air missile systems.

The Tor-M2U missile system is designed to protect military and government installations from airstrikes. It can destroy a variety of aerial targets such as cruise missiles, guided missiles, helicopters, aircraft, guided bombs, unmanned aerial systems, and high-precision weapons flying at low and medium-altitudes.

The new-generation, all-aspect, all-weather ADMS is capable of operating in difficult air and jamming environments during day and at night. The missile system was exhibited at the Victory Parade in Moscow in May 2014, as well as at the Army 2015 forum held in June 2015.

A naval version of the Tor-M2U is being developed by Izhevsk Electromechanical Plant Kupol for integration on to the Russian Navy vessels.

In December 2011, the air defence units of the Southern Military District stationed in Volgograd region received first samples of Tor-M2U missile systems for the replacement of the Osa missile system.

The Russian Armed Forces’ Eastern Military District located in Khabarovsk Krai received Tor-M2U missile systems under a state defence order in July 2012. Live firing tests of the ADMS were conducted by the 726th Air Defense Forces in Yeisk at Kapustin Yar in August 2012.

The Eastern Military District situated in Primorsky Krai received 20 Tor-M2U missile systems in November 2014 for the replacement of the Wasp air defence systems.

A Tor-M2U ADMS engaged six air targets, manoeuvring at high-speeds and different altitudes during a live combat firing test conducted by air defence units of the Eastern Military District in Khabarovsk at the test site in Astrakhan region in June 2015. The tests were concluded in July 2015.

The Tor-M2U air defence missile system is armed with 12 9M331 surface-to-air guided missiles, which are launched from aluminium containers. The missile’s high-explosive fragmentation warhead and an active proximity fuse allow it to destroy targets moving at speeds of 700m/s and altitudes of 6,000m, within a range of 12km. It can fire targets with a short stop of three to five seconds.

It is capable of detecting and tracking approximately 48 high-manoeuvring air targets and simultaneously attack up to four targets.

The anti-aircraft missile system is based on a 9A331 (GM-5955) tracked combat vehicle, which can travel at a road speed of approximately 65km/h for a range of 500km. It is operated by a crew of four members including a driver, a commander and two operators.

The crew cabin is located at the front section and the turret is mounted at the centre of the vehicle. A surveillance radar antenna, fitted at the rear of the vehicle, provides 90° scan coverage. The vehicle is also equipped with a K-band, phased-array, pulse-Doppler, electronically-steered radar that has a range of 25km.