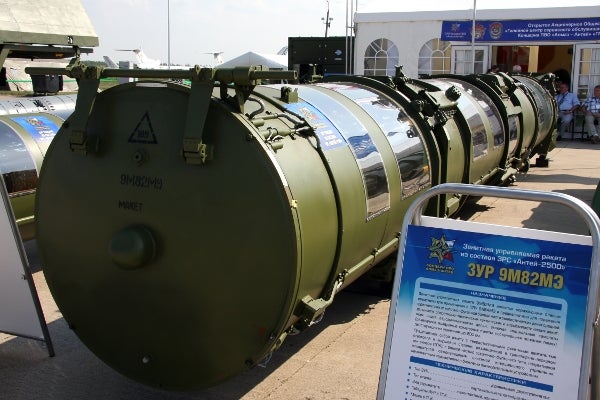 The S-300VM ADMS is operational with the Russian Army. Venezuela received two S-300VM air defence systems in April 2013. Russia has also offered the missile system to Turkey and Saudi Arabia.

The S-300VM anti-ballistic missile defence system is developed based on the S-300 surface-to-air missile system, which entered into service in 1979. The new missile system features high degree reliability and enhanced mobility, and can operate under all weather conditions during both day and night.

The air defence system is mounted on a MT-T tracked cross-country vehicle designed and built by Kharkov Morozov Machine Building Design Bureau. It can operate independently or can be integrated into other air defence systems. It is equipped with advanced electronic systems and a new 9S457ME command post vehicle.

The missile system can simultaneously engage up to 30 aerodynamic targets and up to 24 ballistic targets. The guided missiles can be launched at an interval of 1.5 seconds from the same launcher, and simultaneously using different launchers. The system is effective against the targets with a minimum radar cross-section of 0.02m².

The S-300VM ballistic missile defence complex consists of a 9A83ME launcher unit, a 9A84ME loader / launcher unit, and a 9S32ME multi-channel missile guidance radar. It can be deployed or deactivated within six minutes.

The 9A83ME launcher unit is installed with four 9M83M/ME missiles, which can destruct ballistic targets at a maximum speed of 3km/s. The missile has a maximum kill range of 130km and a kill altitude of 25km. It can destroy medium-range ballistic missiles with a firing range of up to 1,100km.

The 9A84ME loader / launcher unit is fitted with two 9M82M/ME missiles. Each missile has a kill range of 200km, firing range of 2,500km and a maximum kill altitude of 30km. It can engage ballistic missiles re-entering at speeds of up to 4.5km/s.

"The missiles are equipped with 150kg of high-explosive warheads and can be fired up to a range of 3km above sea level."

The missiles are equipped with 150kg of high-explosive warheads and can be fired up to a range of 3km above sea level. The operating range is 40km and the maximum speed is 50km/h. The missile can travel up to 250km without refuelling, with subsequent operation of gas turbine power unit for two hours. It can withstand a temperature ranging from -50°C to 50°C, humidity of 98% at +30°C, and wind speeds of up to 30m/s.

The 9S32ME multi-channel missile guidance radar is equipped to provide guidance for up to two missiles from the same launcher and a maximum of four missiles from different launchers. The radar is mounted in front of the 9A84ME launcher unit, providing 360º coverage in azimuth angle and 180º in elevation. It is mounted in a semi-fixed position on the 9A83ME launcher and provides 90º coverage in azimuth and 110º in elevation.