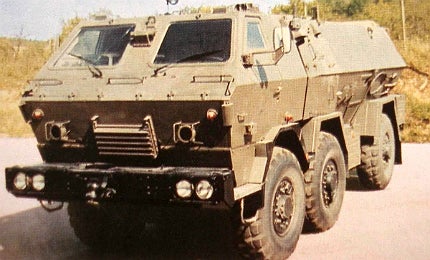 Tatrapan is a 6×6 multipurpose armoured vehicle manufactured by VYVOJ Martin, a company based in Slovakia. The vehicle is intended for multipurpose missions, such as troop transportation, or as a weapon, specialised or communication systems carrier.

Tatrapan vehicles are in service with Slovak armed forces and the Greek Army. The vehicles were supplied for Nato peacekeeping missions and United Nations missions. Tatrapan was also deployed in military missions in Eritrea, Iraq, Afghanistan, Golan Heights and Cyprus.

Tatrapan is operated by a crew of two to three members including a commander, driver and an optional gunner. It carries up to ten troops. The vehicle measures 8.4m in length and 2.8m in height. The combat weight of the vehicle is 22t.

The Tatrapan armoured vehicle is based on the chassis of Tatra T-815 military vehicle. The vehicle accommodates a driver and a vehicle commander in the cab. Troops are housed in the removable special purpose body which can be modified and equipped for various applications. The section is designed as a separate unit for allowing the crew of the compartment to work independently in a stable autonomous workplace. The interior space can be custom built according to specific requirements of the customers.

The all-armoured, two-seat cabin is fitted with flat safety wind shields and side screens protected by removable safety armour visors. The cabin features a day and night vision system, communications, intercom, heating and a filtered ventilation system and air conditioning system. The hydraulically tiltable cabin is mechanically locked. The roof of the cabin is provided with semicircle-shaped hatch cover for mounting a 7.62mm machine gun turret.

The rear section of the vehicle is equipped with effective air conditioning system for the transport of personnel in rigid climates. The structure is provided with an electric power generator. The compartment offers large amount of armoured internal space for housing a special radar, fire control, medical, reconnaissance and other systems. The vehicle improves combat efficiency of specialists, operators and troops by offering a high degree of working and safety conditions.

Armament and self-protection of the Slovakian vehicle

Tatrapan is armed with small arms and personal equipment. The cabin mounts a 7.62mm machine gun, while a 12.7mm machine gun is installed on the top of the superstructure.

The all-armoured vehicle is designed to protect the cabin crew and the superstructure against 7.62mm armour piercing rounds and shell splinters. The V-shaped bottom of the vehicle is specifically built to offer improved protection against mine explosions. The gun turret is covered with protective thermal insulation materials.

Engine of the Tatrapan multipurpose vehicle

"The Tatrapan armoured vehicle is based on the chassis of Tatra T-815 military vehicle."

The engine develops a maximum power of 450hp. It generates a maximum torque of 2,000Nm at 1,200 to 1,500rpm. The engine and fuel tanks are equipped with automatic fire fighting system.

Tatrapan is a permanent all-wheel drive vehicle delivering excellent cross country capabilities. The vehicle has a ground clearance of 390mm and turning diameter of 23m. The vehicle is equipped with an inter-axle, three lockable differentials, independent swing semi-axle suspension, lock-bone tube chassis and central tyre inflation system. The vehicle can be operated in extreme temperatures of up to 55˚C. Tatrapan has a maximum speed of 80km/h and range of 1,000km. It can cross a vertical step of 600mm and trench with a width of 1,100mm. The vehicle can ford a water depth of 1,400mm.

VPK-3927 Volk is a tactical high-mobility multipurpose armoured vehicle produced by the military-industrial company Voenno-Promyshlennaya Kompaniya (VPK). VPK is the military division of the GAZ group.

The new Aravis family of multipurpose heavily protected armoured vehicles has been developed by Nexter Systems, who first revealed the vehicle at the Eurosatory show in Paris in June 2008.