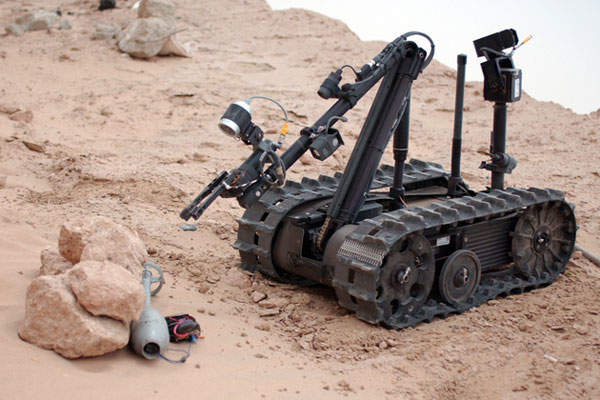 The TALON lightweight unmanned tracked robot is designed and manufactured by Foster-Miller. 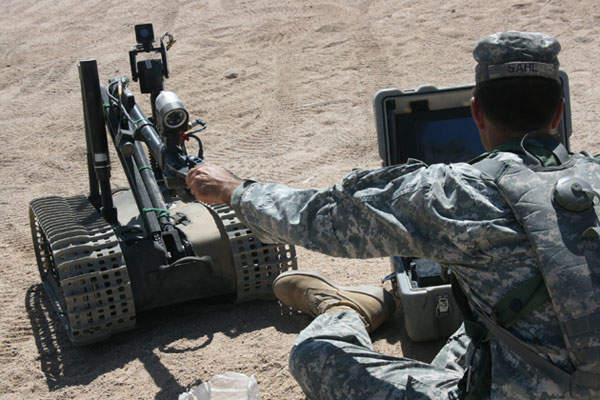 The TALON military robot has a payload capacity of 45kg. 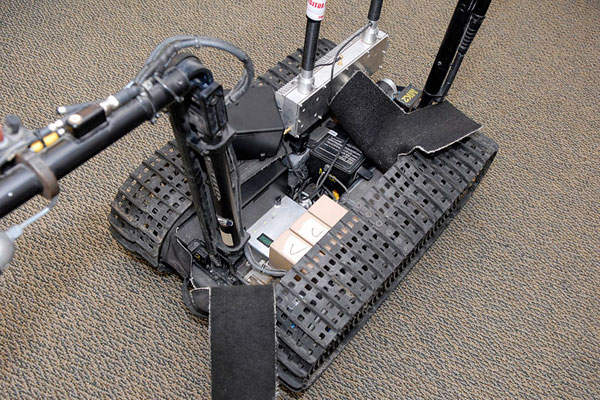 The TALON robot was displayed at the Armed Forces Day Joint Service Open House in May 2008. Image courtesy of Sgt. Jennifer Sheldon.

The robot is controlled by a water-resistant operator control unit (OCU). Image courtesy of Todd Mozes.

TALON is a lightweight, unmanned, tracked military robot designed and built by Foster-Miller, a company owned by QinetiQ North America. The robot is developed to protect warfighters and first responders against explosive threats.

The TALON robot was initially deployed by the EOD teams for military operations in Bosnia in 2000. The robots have been in service with the US military since 2001.

"The robot is developed to protect warfighters and first responders against explosive threats."

The Naval Explosive Ordnance Disposal Technology Division (NAVEODTECHDIV) awarded a $26m contract for 151 TALON robots and spares in April 2007. Foster-Miller was also awarded a further $18.5m contract for 114 more robots in June 2007. Both the contracts were part of the six-year, $257m indefinite delivery / indefinite quantity (IDIQ) contract awarded to Foster-Miller in September 2005.

The Robotic Systems Joint Program Office (RSJPO) of the Naval Air Warfare Training Systems Division (NAVAIR) increased its IDIQ contract value from $63.9m to $150m for the purchase of additional robot systems and spares for service in Iraq and Afghanistan, in May 2007. It also awarded a $400m follow-on contract for additional robots and replacement parts in May 2008. The 2,000th TALON was delivered to the US military in May 2008.

QinetiQ received $58.5m in funding from the US Army and Navy to deliver additional TALONs in December 2008. The new TALON IV Engineer mine-detecting, counter-IED robot was unveiled in February 2009.

In November 2012, QinetiQ received orders worth $8.4m from the Czech and Polish military forces to supply TALON robots for EOD missions.

The TALON robots are also in service with the UK Ministry of Defence since April 2010 to support the army’s Talisman programme in Afghanistan.

The TALON robot system features modular design incorporating a broad array of sensor packages. It is quick, durable and easy to use. The robot has a high payload-to-weight ratio and can be deployed in all environmental and terrain conditions. It offers enhanced safety to infantry units.

The TALON features a disruptor-ready manipulator arm, 360° rotating wrist, gripper, microphone and a loudspeaker. It is equipped with intuitive joystick controls for 180° pitch lower arm and 270° pitch upper arm.

The robot can be configured with a number of sensors to detect gas, chemical, radiation and temperature in HAZMAT duties. It can also be fitted with a heavy-duty rotating shoulder, longer reach for heavy lift operations and a range of weapons for special weapons observation reconnaissance detection system (SWORDS) duties.

The TALON tracked military robot is controlled by a water-resistant operator control unit (OCU) through a two-way radio or fibre-optic link. The OCU features a quad screen display and uses nickel metal hydride rechargeable batteries. It can be optionally powered by rechargeable lithium ion and non-rechargeable Alkaline batteries.

The 510 PackBot is a multi-mission tactical mobile robot developed and manufactured by iRobot.

The 15kg OCU is 48.3cm long, 40.6cm wide and 22.9cm high, and uses digital / analogue line-of-sight (LOS) propagation to transmit / receive radio signals in a range between 500m to 800m. The data can also be transmitted or received using fibre optic communications within a range of 300m.

The robot can also be controlled by a laptop control unit (LCU) as well as a lightweight, wearable tactical robotic controller (TRC), which has a length of 28.57cm, width of 23.49cm, height of 6.35cm and weight of 5.44kg.

The TALON robot is mounted with up to seven cameras to provide soldiers with a comprehensive view of the ground for identification and detonation of suspicious objects from a safe distance.

The TALON tracked military robot is powered by two lead acid rechargeable batteries, which each have a capacity of 300Wh and provide a three-hour run time. The robot can be optionally powered by a Q-Tray with six standard BB-2590/U batteries.

The robot has a maximum manoeuvrable speed of 8.37km/h. It can climb stairs up to 43°, negotiate side slopes of 45° and snow or demolition rubble of 38cm, and navigate through rock piles.